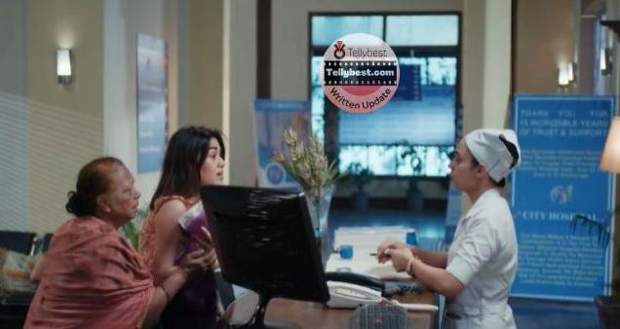 Today's Pandya Store 15th December 2022 episode starts with Dhara telling everyone that she only has three children in her life with a fake smile.

While Suman looks at Dhara with a soft smile, Shiva, Dev, and Krish hug Dhara, and Shiva even promises that they won’t let Dhara down for this decision.

When Dhara jokes that she knows how her children will take care of her in old age, Krish yells angrily that if Dev and Shiva knew about Dhara’s happiness, they would not think about making Dhara happy but would think about how to bring Chiku home.

Dhara tries to talk to Krish but Krish storms away while Suman thinks she knows that even though Dhara is here, her mind is with Chiku only but her hands are tight.

Later in the room, Raavi is looking at a lamp when an idea forms in her mind and she calls Arnav who does not pick up the call.

On the other hand, Arnav is looking at Raavi’s pictures on his phone when he gets Raavi’s call but he ignores it.

Meanwhile, in Basti, everyone is hovering over Shweta who is anxiously waiting for Chiku to open his eyes.

When Chiku finally opens his eyes, Shweta thanks the aunty for her home remedy, and the aunty further suggests Shweta use Chiku’s illness to get some money from her in-laws’ house.

She even adds that it is not a rule that if someone takes help from anyone, they cannot destroy them.

Hearing this, Shweta smiles creepily and thanks the aunty for this brilliant idea who in return orders Shweta to share some money, and Shweta agrees.

In the meantime, in Pandya’s house, Dhara is thinking about Chiku while making the papad and Gautam notices Dhara’s poker face and announces he will bring juice for her but Dhara orders him not to bother in a little aggressive voice.

Dhara then is about to mix salt in the mixture but Rishita stops her by reminding her that she has already done that.

Dhara stands up and orders Rishita to finish the rest of the work as she cannot focus.

When Rishita replies she needs to take Chutki to the park, Dhara calls out to Raavi and as soon as Raavi arrives, Dhara orders her to finish the task.

Irritated Raavi urges Rihsita to help but when Rishita denies it, Raavi starts yelling that she wants to go on a job hunt instead she is busy with household work.

Looking at Dhara, Raavi again taunts her for making her lose the job but this time furious Dhara screams to Raavi not to forget that she and Shiva are talking to each other only because of her.

When Raavi looks at Dhara with fuming anger, Dhara announces in frustration that no one asked Raavi to keep things hidden from Shiva or make her boss her friend.

Dhara losses her cool when Raavi orders Dhara not to blame the family members because of her decision and Gautam orders everyone to stop.

Gautam even announces he will appoint a woman who will make papad for them but frustrated Dhara yells that when everyone is busy she takes care of the family and now everyone has an issue to help her.

Shweta and the aunt are about to enter the house and get happy to see Pandya’s family fighting.

Afterward, Shweta and the aunty gather a crowd in front of Pandya’s house by lying that Chiku is very ill.

When the Pandya family walks out of the house, Dhara's heart breaks seeing Chiku lying on a rough mattress but Gautam holds her hand.

On the other hand, Rishita and Raavi whisper to each other that Dhara will change her decision again and Rishita orders Shweta to walk away who yells that this is public property.

Shweta even questions Rishita about what she will do if something like this happens to Chutki.

© Copyright tellybest.com, 2022, 2023. All Rights Reserved. Unauthorized use and/or duplication of any material from tellybest.com without written permission is strictly prohibited.
Cached Saved on: Wednesday 25th of January 2023 03:16:38 PMCached Disp on: Monday 6th of February 2023 05:47:16 AM