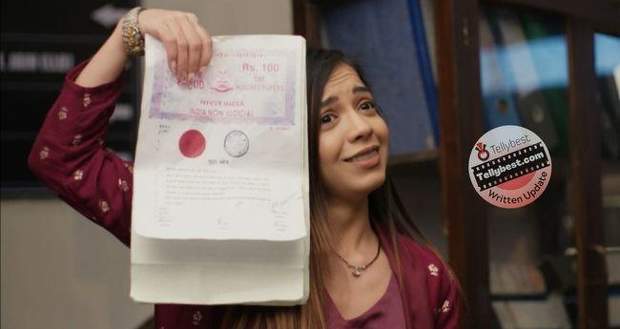 Today's Pandya Store 15th January 2023 episode starts with Dhara praying to Lord Somnath for saving their family from grave danger but gets upset as she thinks about Shiva’s condition.

Raavi comes, joins Dhara, and says that Shiva did the right thing that he had to do for the family.

Rishita also comes and says that Shiva got injured because of Chutki to which Raavi says that Chutki is also their daughter alongside Dev and Rishita.

Meanwhile, Shiva calls for Raavi and tries to pull the wheelchair as he needs to get up for some reason.

However, Shiva almost falls to the floor from the bed while trying to get the wheelchair but Gombi saves him.

Gombi, Dev, and Krish greet Shiva for the festival of Uttrayan and help him to sit in the wheelchair.

Gombi tells Shiva that he will prepare him for the festival but Shiva refuses to get ready as he has nothing to do.

Reminding Shiva about their childhood when he left his studies for the Pandya Store, Gombi asks Shiva to let him be his support this time.

Dev feels guilty for Shiva’s condition for the sake of Chutki but Shiva tells him that Chutki is their daughter too which gives him the right.

Suman comes with the uptan and tells Gombi that he forgot about it this year too.

With love and care for her sons, Suman rubs the uptan on her sons' faces and asks them to promise her that they will be together forever.

Gombi, Shiva, Dev, and Krish promise Suman that they will never get separated in this lifetime while Rishita, Dhara, and Raavi also promise each other to always connect the family together.

The brothers open the Pandya Store with all the rituals so that the shop runs smoothly as it is special to them.

The entire family gets busy with the festival preparations while Raavi takes care of Shiva by feeding him his medicine.

As Krish suggests all of them fly kites, Shiva says that he is good inside the house and does not need to go.

However, the three other brothers lift Shiva along with the kites and take him to the roof along with his cot.

Meanwhile, Sweta enters the Pandya household in the disguise of an old lady and tells the Pandyas to be happy for the last time as she will play her last card this time.

All the family members happily fly their kites in the sky and enjoy cutting other’s kites with others cheering for them.

Krish comes downstairs to take more kites when the lawyer enters the house and asks Krish to bring the divorce papers quickly.

As Krish goes inside to bring the papers, Sweta asks the lawyer how much time a divorce needs to be processed.

The lawyer says it is very difficult to get a divorce these days, but it gets easier if both parties are ready to leave.

Krish hands over the papers to the lawyer and notices the old woman standing at their door without knowing that it is Shweta.

© Copyright tellybest.com, 2022, 2023. All Rights Reserved. Unauthorized use and/or duplication of any material from tellybest.com without written permission is strictly prohibited.
Cached Saved on: Wednesday 25th of January 2023 01:36:51 PMCached Disp on: Monday 6th of February 2023 05:18:38 AM