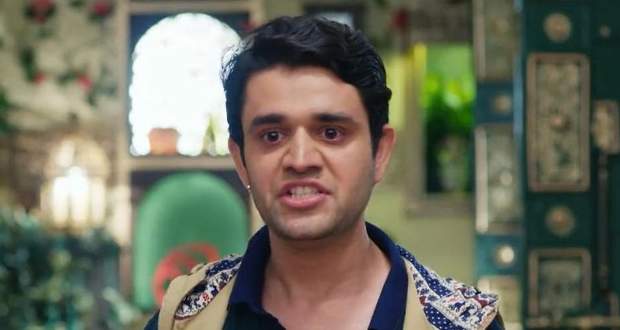 Today's Pandya Store 15th July 2022 episode starts with Dhara and Gomby getting into a silly argument with each other in the kitchen.

Gomby tries to make it up to Dhara and asks for tea innocently.

However, Dhara tells Gomby to make tea himself but he does not know the steps to make tea.

While Dhara scolds Gomby, Raavi records all of their banter on her phone and live streams it.

On the other hand, Krish nervously approaches Rishita to talk about Kirti.

Rishita laughs when Krish says he has fallen in love with a girl but after he mentions Kirti’s name, Rishita loses her calm and screams at Krish.

Meanwhile, Raavi live streams her daily routine through her phone but is soon interrupted by an excited Shiva who brings a phone case for her.

Raavi tries to act disinterested when Shiva gets a little romantic with her. He soon notices Raavi’s phone recording them and scolds her to spend some time apart from the tiny machine.

Shiva leaves his room angrily and asks Dev to make a social media profile for him.

However, Rishita grabs everyone’s attention when she shoves Krish into Suman’s feet, asking him to reveal who he has fallen in love with.

Krish admits that he loves Kirti in front of Suman, making Shiva angry.

Shiva says they send Krish to college to study and not to romance girls.

Dhara tries to calm down everyone but Rishita does not stop pinching Krish and Pandya Family’s status.

Rishita says she does not want to see her sister struggle and adjust as she did in Pandya Family.

Rishita’s callous statement makes Suman hurt and Suman says who is Rishita to reject Krish; she will reject Kirti.

Krish screams and openly makes a threat and a promise to Rishita that he will only marry Kirti and will deal with anyone single-handedly who will stop their union.

© Copyright tellybest.com, 2020, 2021. All Rights Reserved. Unauthorized use and/or duplication of any material from tellybest.com without written permission is strictly prohibited.
Cached Saved on: Saturday 1st of October 2022 11:52:32 PM