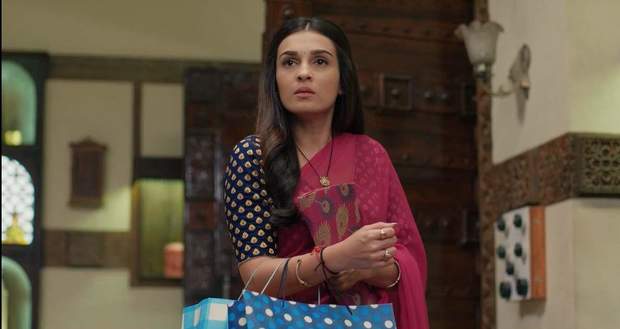 Today's Pandya Store 16th April 2022 episode starts with Kamini suggesting that both families should party together in front of the Pandya store.

Rishita tells them that she and Dev won't make it to the party. Dhara tells Rishita that she will be waiting for their arrival.

On the other hand, Shiva is setting up the store and sees some new stuff being moved into the store in front. He tries to interface but doesn't receive much information.

Just then, Raavi calls Shiva and introduces him to his new tutor.

Later, Shiva sees Raavi struggling to keep bottles on higher shelves, he picks Raavi up and then puts her down gently pressing her into the shelves.

On one side, Gautam and Dhara are busy preparing for the party while on the other Shiva enters his new classroom, only to be mistaken as the teacher and made fun of.

The usually hot-tempered Shiva keeps his calm at all the embarrassment thrown his way.

Shiva comes back to the Pandya store and complains to Raavi that he won't go back there.

At the venue, Gautam is frantically preparing when Dhara pulls him away and offers to give Dev something that will show him their clean intentions.

Dhara suggests that they gift Dev a part of the Pandya store.

Gautam is stunned at such a suggestion but contains his frustration and tries to explain to Dhara that he will have to confront Suman, Shiva and Krish.

Dhara pleads with Gautam to not tell anything to Suman just yet and that she will do the necessary later.

Raavi convinces Shiva to join in the preparation and seeing Shiva involved, Dhara hugs him.

Gautam leaves to go to the registrar's office.

Later, Dhara greets all the guests and Gautam hands her the Pandya store papers.