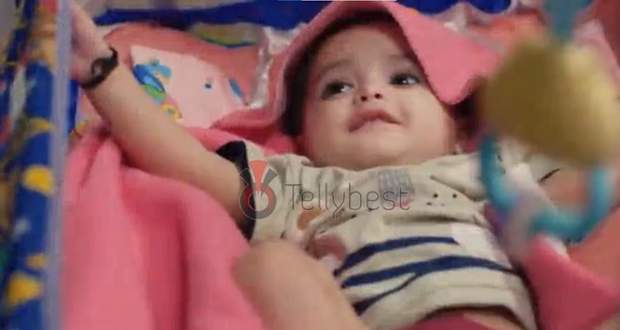 Meanwhile, Rishita complains that the moment isn't getting documented and shouts for Raavi to record the moment.

Rishita keeps swearing in English as she's in pain while Suman tries to distract her by talking about the time when she was pregnant.

Raavi calls for help from the doctors on her live video while Rishita screams for ice cream to distract herself from the pain.

Elsewhere, Shiva tells the police that they were not fighting and talking about Rishita being in labor pain.

Back at the Pandya house, Rishita cries out in pain saying that she wants the baby out of her while the doctor reaches there.

However, the electricity goes out at the same time and all the ladies shine their phone lights to help in the delivery.

The doctor checks Rishita and tells her that everything is fine which brings a smile onto the faces of the rest of the Pandya ladies who were doing their best to help Rishita.

Finally, after a lot of pushing and crying, Rishita gives birth to the baby which resonates throughout the house, and reaches the police van inside which the Pandya brothers are sitting.

Dev begs the police officer to let him go while the remaining Pandya brothers also insist to be let go.

Back inside the Pandya house, the doctor cleans up the baby and gives it to Suman who cries out of happiness.

Rishita asks why everyone is crying while Suman wipes her tears and announces that Lakshmiji has graced their family.

The family gets happy to hear that a daughter is born while Raavi rushes outside to inform the Pandya brothers about the good news.

However, the Pandya brothers are at the police station trying to convince the police officer to make a phone call at home.

Just then, Raavi calls Shiva's phone and the police officer picks it up after which he informs Raavi that the Pandya brothers are at the police station for creating a scene in public.

Later, Raavi comes inside and breaks the happy atmosphere as she informs them that the Pandya brothers are in jail.