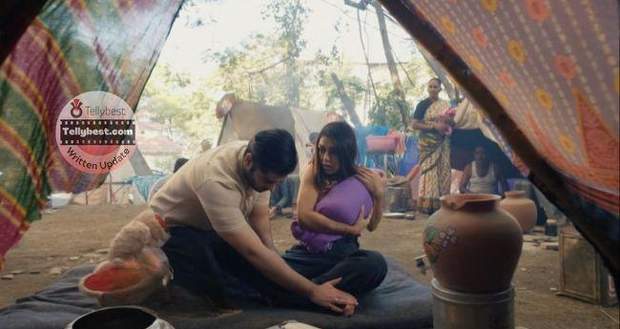 Enraged Rishita tells Shweta if she wants to beg she can do it in front of her own parents’ house.

Shweta swats her and says what Rishita would do if Chutki was in the same situation while disheartened Rishita walks away to Raavi who is holding Chutki.

Raavi tells her to not be disheartened as Dhara will soon get Chiku and Shweta back.

Meanwhile, all the neighbors criticize the Pandya family and Gautam.

Seeing Chiku steers up the fatherly love in Gautam and he tries to hold him but Dhara holds Gautam and takes him inside.

Shweta gets shocked seeing Dhara walking away from Chiku and says that their plan might have failed.

Inside the Pandya house, Dhara starts to make papad as she knows no one else will do it for her.

Gautam tells her that she doesn’t have to do this and Raavi intervenes and says that she will do it today itself.

Angrily Dhara taunts Raavi that she should go look for jobs as Dhara still has her hands.

Rishita warns Raavi to not speak anymore or else Dhara’s anger will burst on her and Rishita decides to give them money.

At the store, Shiva rudely orders Krish around so Krish stands up to him and tells both Dev and Shiva that he owns this place as much as they do so why does he have to run around always?

Arrogantly Shiva calls Krish and tells him that with one slap he can remove Krish’s arrogance and he further says that this shop is Gautam’s and Dhara’s.

Hearing this Krish bursts into laughter and says that Dev and Shiva treat Gautam and Dhara like servants who cater to their (Dev and Shiva) needs all the time.

Further, he says that if Dev and Shiva thought about Dhara and Gautam even a little they would bring Chiku back and not worry about what their wives said.

Dev says that Krish should stop spouting nonsense as they are thinking about this family only.

To this Krish says that it is the truth that they are thinking about the family but to both of them family means their wives and no one else.

Further, Shiva shouts at Krish and tells him he is way out of line.

So Krish says that yes he may be out of line but 10 years ago if Dhara did not take care of them all three brothers would be just like Chiku.

At the same time, while making papad Dhara burns her leg and bursts into tears saying that she can’t do anything and further says that at the store stock of only 7 days is left and she can’t even make papad.

Suman tries to remove her confusion by asking why Dhara is crying.

Dhara tells her that she is losing her mind after seeing Chiku like that and Gautam tries to calm her but she has lost all hope.

At the same time, Rishita gives Shweta Rs 5000 for Chiku and taunts her.

Later, at the store, Krish tells them that he has trust in his relations which is why he can handle Shweta.

In the house, Rishita tells she gave 5000 to Shweta.

Outside Shweta tells the lady that soon this house will break and on the other hand Dhara scolds Rishita.

Later, Gautam goes to Shweta and asks her to give Chiku as he wants to adopt him.

Shweta tells him that will he rub his nose in front of her and shrugs him.

To her surprise, Gautam touches her feet and asks for Chiku.

Shweta acts like a mother and Sati Savitri which enrages Gautam and he tells her to be straightforward and she tells that she wants 25 Lacs.