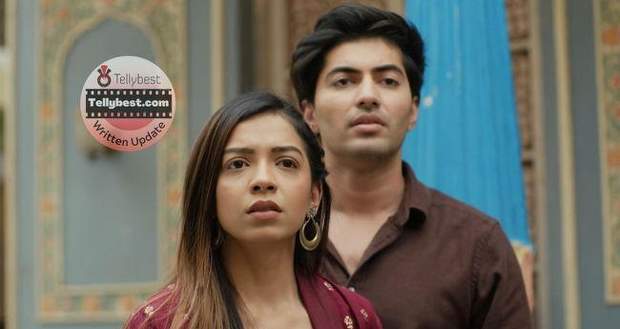 Today's Pandya Store 16th January 2023 episode starts with Shweta entering the Pandya House in disguise as an old woman who is unable to walk properly on her own.

Krish who is excited to fly the kite with Chutki and Chiku's names sees the old woman while Shweta nervously makes a story that since she saw a lot of kites in the sky, it reminded her of her old days.

Krish in good respect offers the old woman (Shweta) to come to the terrace and participate in the flying kite competition herself.

However, she asks him to go first since she will take time climbing the stairs.

Krish goes upstairs and Dhara compliments him for making such an eccentric kite.

Dhara says that her Shiva will fly it and Shiva happily obliges while Raavi handles the thread in her hand.

Suman also encourages Rishita to fly a kite while Rishita says she cannot handle Chutki and also fly the kite at the same time.

Shiva asks Rishita to place Chutki in his lap so she can fly the kite with Dev.

Rishita gets giddy as she asks Dev to put sunglasses on her face.

Suman taunts her playfully that she wants to fly the kite as a heroine while all the members of the Pandya Family derive delight from celebrating the Uttarayan festival.

Shweta reaches the terrace and stays at the back when she sees Dhara going to fetch some milk for Chiku and Chutki.

As everyone gets involved in flying the kites except Shiva who is sitting by the kids, Shweta takes chance and steals Chiku in her arms.

However, Shiva gets up from his wheelchair unexpectedly and blocks Shweta's way.

Shweta in panic pushes Shiva downstairs and runs to leave the Pandya House.

Shiva doesn't give up and gets up even after his bandaged head starts oozing out blood.

Shweta looks up at him with a scared expression while Shiva snatches Chiku from her grasp.

He puts Chiku in his bassinet safely while the Pandya family members see the tussle between Shweta and Shiva.

However, unable to take Chiku, Shweta steals Chutki away and runs in a truck while Raavi goes to check up on Shiva who lies on the ground, tired and weak.

Suman screams for someone to call the ambulance while Krish takes out his scooter along with Dev.

Dhara sits behind Krish and Rishita behind Dev as they both chase Shweta to get Chutki.

In the middle of the way, a big truck coming their way makes both Dev and Krish lose their balance, and their scooties jam against a tree.

Shweta smiles as her way becomes clear while Rishita hurts her head along with Dhara whose blood also comes out.

Krish is able to sit up a little but he also gets unconscious.