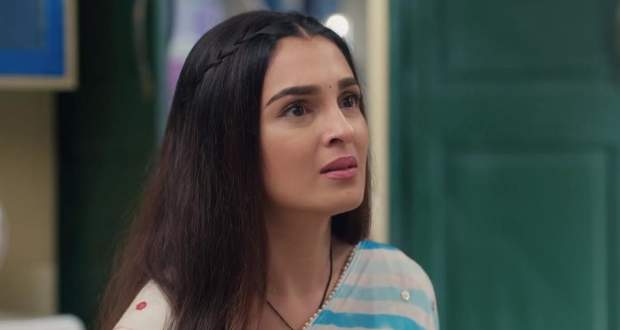 Today's Pandya Store 16th July 2022 episode starts with Rishita getting mad at Krish for falling in love with Kirti.

Dev tells Rishita to calm down after she starts raising her fingers in anger against Krish.

Raavi quickly brings a glass of water for Rishita to drink.

However, when Krish threatens he will marry Kirti and only Kirti, Rishita throws the glass at him and it shatters on the ground.

Taking a glass piece, Krish writes I love Kirti on one of the pillars.

Getting agitated, Rishita asks the Pandya Family members how can they tolerate Krish’s bad attitude in the name of love.

Gomby instructs Shiva to follow Krish while Dev follows Rishita into their room.

Meanwhile, Gomby gets angry at Dhara for siding with Krish and not supporting Rishita.

On top of this, Suman says it is only Dhara’s upbringing that has made her boys insolent and roadside Romeo’s.

Meanwhile, Krish gets nervous for a second after he reaches Janardhan’s House.

Shiva shakes Krish’s shoulders and tells Krish to call him if Janardhan raises his hand at her.

However, Shiva also tells Krish he will be helping Krish marry Kirti only if Krish gets permission from Janardhan.

Janardhan asks why little Pandya is shouting in his house early in the morning.

Mocking Krish’s inability to earn, Janardhan asks what will he make Kirti eat even if she marries Krish.

Kirti then lies and says Krish is earning lakhs due to online trading.

Much to Krish’s shock, Janardhan agrees with Krish’s request to marry Kirti.

However, Janardhan’s condition for Krish is to break all his ties with Pandya Family after he marries Kirti.

Meanwhile, Raavi supports Dhara, and Krish but Suman says it is because Dhara supports Raavi when she is wrong and vice-versa.

Shiva threatens to beat Krish when he does not speak anything even after standing in front of Suman.

However, the whole family is shocked when Krish reveals Janardhan’s permission to let Krish marry Kirti.

© Copyright tellybest.com, 2022, 2023. All Rights Reserved. Unauthorized use and/or duplication of any material from tellybest.com without written permission is strictly prohibited.
Cached Saved on: Monday 21st of November 2022 08:12:39 AMCached Disp on: Thursday 1st of December 2022 10:59:31 PM