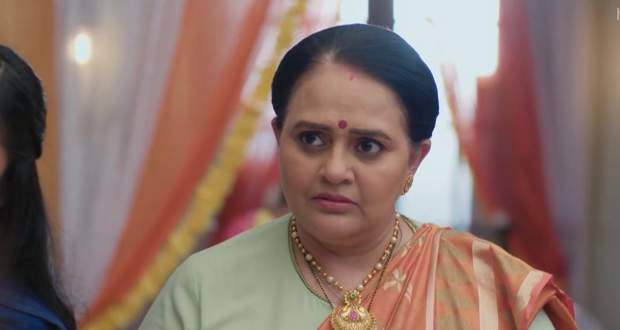 Today's Pandya Store 16th May 2022 episode starts with Dhara helplessly trying to convince Rishita that she is not lying. She had definitely brought the necklace for Rishita.

Dhara demands a CCTV footage to prove her innocence to which Kamini says that there are no CCTVs in the house.

In the meanwhile, drunk Gautam calls out for Dev. He holds Dev’s and Rishita’s hands and asks them to come to the Pandya house with them.

Rishita bluntly denies Gautam. She believes that Gautam and Dhara did all of this to create a scene in the function. She says that she didn’t expect Gautam to be drunk at such an important function.

Furthermore, she adds that if the elders of the house behave in this way, what are they going to teach their children.

Kamini and Janardhan are secretly enjoying the scene.

Infuriated Dhara steps in between. She stops Rishita from saying any word against Gautam.

Rishita is extremely annoyed at everything happening in the function. Gautam tries to tell Rishita that he hasn’t had anything but only the juice offered by Janardhan.

Rishita says that she thought she had made an impulsive decision while leaving the Pandya House, but now is glad that she did so. She accuses Gautam and Dhara of never really caring about her and Dev.

Dhara cries in front of Suman. She pleads with her to convince Rishita about their innocence. Rishita angrily leaves the hall followed by Dev.
Suman consoles crying Dhara and Gautam. She tells them that there is no need of bringing Dev and Rishita back. She says that she can wait for Dhara and Gautam to have kids to become a grandmother. She then leaves holding Gautam’s hand.

Rishita warns Dev that she would never go back to the Pandya house. Dev gets a call regarding the delivery of their required products in the Pandya store. He is personally asked to visit the store. On reaching the store, he finds nobody there.

Gautam suddenly wakes up in the middle of the night telling Dhara that he has a bad feeling about something. He suddenly gets a call that the Pandya store has caught fire. Gautam is speechless over this horrendous news.