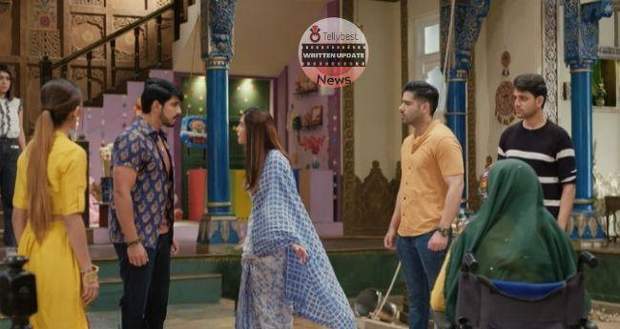 Today's Pandya Store 16th November 2022 episode starts with Shiv shouting at Dhara to stay away from him and talking to her disrespectfully which shocks the whole Pandya family.

Gautam and Rishita start scolding Shiva while Suman says that she did not expect this from him.

However, Shiva argues saying that he also did not expect Dhara to do this to him.

Dhara questions Shiva asking what did she do while Shiva says that she betrayed him by doing something he never expected her to do.

Shiva says that he is dumb as he is still considering how to talk to her when she has ruined his life.

Dhara asks him to talk clearly while he demands to know what she was doing at the hospital with Raavi.

Dhara confidently says that she went to the hospital with Raavi for her fibroid removal.

Shiva however asks her if it was fetus removal and goes towards Rishita.

He gives her the reports and tells her to read them and tell the whole family what is written there.

Rishita gets shocked to see the reports and informs the Pandya family that it is a fetus removal operation written in there only.

Dhara calls it nonsense and snatches the reports to see what it is.

Dhara gets shocked to see that the fetus removal operation is written on the reports and tells Shiva that there is some mistake.

Dhara tells Shiva that the fetus was not removed and he can ask the doctor too while Raavi comes there at the same time.

Raavi asks what is happening and Rishita asks her to clear what operation she got done.

Raavi says that it was fibroid removal only while Dhara reveals to her that Shiva thinks she got an abortion.

Feeling confused and angry, Raavi asks Shiva if he got drunk in the middle of the day.

Shiva holds Raavi by the shoulders tightly and shouts at her to reveal why she aborted the child.

He asks her if it was because the baby was his or someone else's.

Unable to hear such words, Raavi slaps Shiva hard despite being in absolute pain from the surgery.

Dhara asks Shiva if he has lost his mind and tells him that Swetha is right about him becoming doubtful.

All the family members start rebuking Shiva for doubting Raavi while he says that he also didn't expect that Raavi would do such a thing.

Shiva says that the truth is that the reports exposed Raavi and Dhara's plan.

Dhara says that it must have been a mistake from the hospital's side but he won't believe them.

Shiva says that Dhara did not want to inform anyone about the truth which is why she did not call anyone and informed them about the trip to the hospital.

Dhara tells Shiva to blame her as she was not able to inform him but not Raavi.

© Copyright tellybest.com, 2022, 2023. All Rights Reserved. Unauthorized use and/or duplication of any material from tellybest.com without written permission is strictly prohibited.
Cached Saved on: Monday 21st of November 2022 06:22:14 AMCached Disp on: Wednesday 7th of December 2022 03:02:11 PM