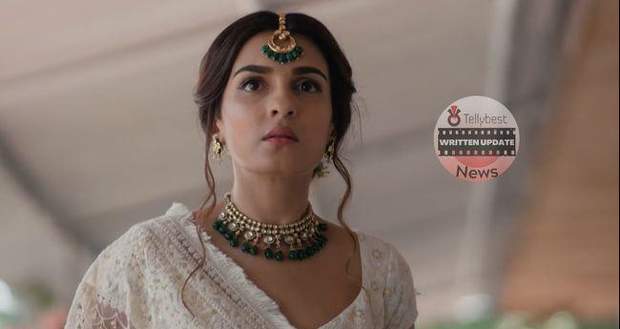 Today's Pandya Store 16th October 2022 episode starts with Krish urging Raavi and Shiva to come with him to the mandap.

He further yells that Raavi and Shiva’s romance can wait but his marriage is delayed.

Suman later questions Raavi about where she was till now and Raavi lies that she was just fixing her dupatta.

While Rishita informs Raavi about Dhara through her eyes, Suman notices and thinks these Pandya ladies are surely cooking up some new plans.

The pandit then urges Krish to seat down for the marriage ritual but Krish announces his brother and sister-in-law are still missing.

Krish calls Gautam but Gautam lies that his stomach is hurting very much and Dhara is taking care of him.

Gautam even urges Krish to continue his marriage without waiting for them.

As soon as Krish cuts his call, Shweta’s mom comes forward and pleads with Krish to agree to marriage because if this auspicious moment goes away then they will have to wait for another three months for the marriage.

Furious Suman then orders Raavi, Rishita, and Shiva to break their silence, and Shiva starts talking in weird words.

Even Raavi along with Rishita denies knowing anything making Suman angrier.

On one hand, Dhara catches Deven and starts slapping him hard; on the other hand, Suman yells that Dhara has a habit of getting attention but Rishita opposes.

Looking at Rishita, Suman smirks and announces that she knew “patrani” can never stay mute for long.

Meanwhile, Deven informs Dhara that he is Shweta’s brother much to Dhara’s confusion.

On the other hand, Shweta pretends to get faint and seeing this Shweta’s mom urges Suman to give instructions to the pandit for marriage.

Later during the wedding ritual, Rishita tells Raavi that they will never let Krish and Shweta’s pheras happen.

Shweta’s mom ties Krish and Shweta’s knots but Rishita slowly comes forward and losens the knot without anyone noticing.

Shweta’s mom notices this and requests Rishita to tie the knot again.

Rishita, however, is not able to tie the knot and Raavi comes forward to do it but Rishita and Raavi start arguing about who will tie the knot.

He even tells Dhara that he is Chiku’s father and Shweta’s ex-boyfriend.

Suman urges Rishita to come forward for the ritual but Rishita intentionally starts spilling the fruits onto the ground again and again.

Suman glares at Rishita and orders her to do the ritual properly but Rishita pretends to get tired and asks for juice.

Suman then orders Raavi to come forward and she starts sneezing uncontrollably.

Looking at Rishita and Raavi, Shiva decides to do the ritual and announces that Raavi and Rishita's drama will never end.

© Copyright tellybest.com, 2022, 2023. All Rights Reserved. Unauthorized use and/or duplication of any material from tellybest.com without written permission is strictly prohibited.
Cached Saved on: Monday 21st of November 2022 07:30:49 AMCached Disp on: Thursday 1st of December 2022 02:24:24 AM