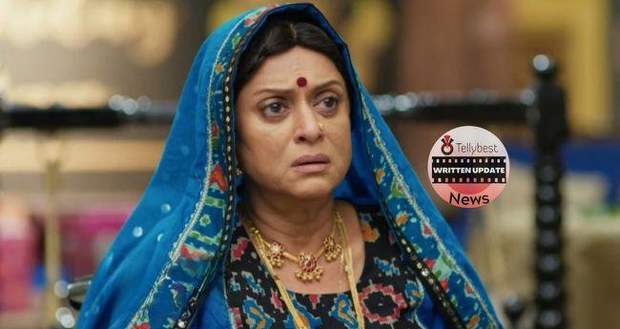 Today's Pandya Store 16th September 2022 episode starts with the Pandya family taking care of Dhara as she is unable to even talk.

Rishita requests Dhara to eat anything for Chiku when the doctor arrives there and checks her.

The doctor put Dhara on a Glucose Drip IV and the family had to feed her or else she would have to be admitted.

On the other hand, Swetha packs her bags when she gets worried as she learns that the video was made by Raavi and Rishita.

The Pandya family also learns this and gets happy while Swetha's mother gets worried seeing the video.

Later, Swetha comes downstairs and tells the family members that it is better if she leaves the house as it is filled with Chiku's memories.

Just then, Swetha's mother comes there and starts blaming the Pandya family for it.

However, Rishita gives a curt reply to Swetha's mother and tells her to look at Dhara's condition and then Swetha's condition.

They get into an argument while Swetha takes advantage of it and tries to blame Raavi saying that one of her crazy fans could have kidnapped Chiku.

Rishita is unable to bear it and snaps at her for not even thinking about blaming Raavi.

Further, Swetha's mother apologizes to the Pandya family and leaves from there informing Swetha to take care of herself.

Meanwhile, Forum goes to a medical shop for the medicine for Chiku but she gets recognized and has to run away without getting any medicine.

Forum manages to get on a tempo and leaves while the man running behind her calls Raavi and informs her about seeing Chiku and where the tempo is headed.

On the other hand, Rishita gets suspicious of Swetha as Swetha keeps getting Forum's calls but she keeps declining all of them.

Further, Rishita tries to make Dhara drink some water while Suman wonders if they will be able to find Chiku or not.