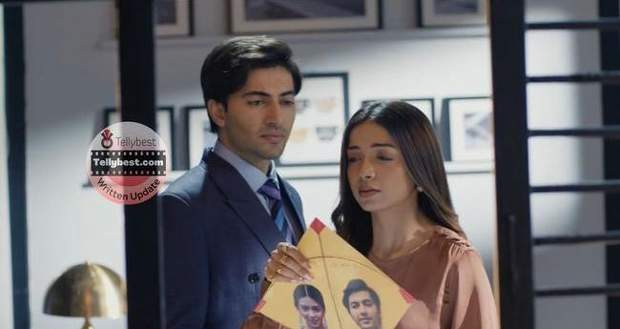 Today's Pandya Store 17th January 2023 episode starts with Dhara walking into the hall with kites having pictures of the family members after 7 years have passed.

Looking at the kites, Dhara says that she has forgotten to bring Til Laddu and Shiva will be furious if he did not get it.

She stops mumbling with a smile as she realizes someone walking towards her who is none other than Chiku.

Dhara welcomes Chiku by showering flowers, causing him to make a face.

Chiku asks Dhara how come she always knows when he is coming.

In reply, Dhara just tells him that she always knows and saying that throws more flowers at him, causing Chiku to smile.

While telling Chiku the special food she has made for the Uttarayan, Dhara is about to fall but Chiku grabs her.

Dhara even tells Chiku that she knows he is always there to take care of her and Chiku announces that indeed he is there for her.

Chiku then asks Dhara about if she has made everyone’s favorite food and Dhara shows him the food that she has prepared.

Dhara orders Chiku to bring Gomby and Suman home for the celebration and Chiku urges Dhara to call others too, causing Dhara’s face to fall.

Meanwhile, in the Pandya store, Gomby is playing with some threads in his hand and singing cheerfully.

A customer then arrives there to buy Till Laddu and by mistake, Gomby returns him 500 rupees instead of 50 rupees.

Gautam does not even react when the customer points it out and he just simply takes the money while mumbling that no one takes anything from them when they die so 50 or 500 money will remain here only.

Gautam puts his head on the counter and a jar falls to the ground.

Without looking at it, Gautam calls Shiva, Dev, and Krish to pick it up and realizing that they are not there he then decides to close the store.

Again a stranger help Gautam to close the store and Gautam starts recalling his good old days which makes his mood bitter-sweet.

Looking at Dhara’s name flashing on the screen, Gautam cuts it with anger on his face and also says that wives are a pain.

After the stranger walks away advising Gautam to walk properly, Gautam sadly states that he cannot take care of himself for seven years and now he is just waiting for his brothers to come back to give him support.

On the other hand, in Pandya's house, Dhara gets shocked when Suman throws Chiku out of the room and accuses him of turning her life black and white.

While Dhara is standing there with Chiku, Suman is busy playing video games with some kids and one of the kids tells Suman that he has made her social media account.

Suman orders him to post a heroine picture as DP and Dhara urge her to take bath as it is Uttarayan today.

Suman however taunts Dhara by saying that not even lord Shiva will forgive Dhara for her deeds but she is still mortal.

Chiku adds that he wears safety whenever he comes in front of Suman whereas Suman announces that she is only the grandma of Chutki, not Chiku.

Later, Dhara is crying feeling miserable and she also blames herself for breaking this family.

Looking around the decoration, Dhara recalls how Suman blamed her for Chutki’s missing & tears flow down her eyes.

At the same time, arriving home, Gautam tells Dhara that Swetha has run away with Chutki from Somnath.

Rishita’s words about leaving the Pandya house forever echo in her mind, and tears stream down her cheeks.

© Copyright tellybest.com, 2022, 2023. All Rights Reserved. Unauthorized use and/or duplication of any material from tellybest.com without written permission is strictly prohibited.
Cached Saved on: Wednesday 25th of January 2023 09:02:40 AMCached Disp on: Sunday 5th of February 2023 03:32:54 AM