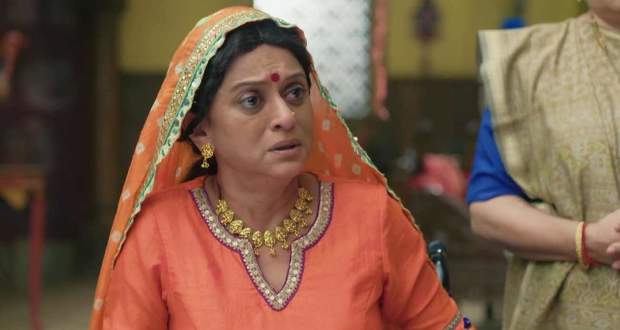 Dhara reminds Gautam how she told him to bring her "child" back safely at home and goes outside to see Shiva’s ashes kept in a mud pot.

Dhara calls Shiva her loveliest Moon as she remembers her memories with Shiva.

Meanwhile, Raavi stares at Shiva’s photo in their bedroom, resting her head against it.

Suman cries as Dhara brings Shiva’s ashes inside the house.

Looking at Gautam helplessly, Suman tells she was going to gift Shiva his childhood shirt and half pants when he was three years old.

Rishita along with Dev cries as Raavi comes out of her room.

However, Raavi asks Suman why is she crying as Shiva is still alive and this dead body belongs to someone else.

Raavi scolds a crying Suman for believing that Shiva is dead as he went as a solid man and cannot come back to his house in a mud pot.

Dhara hugs Raavi, saying she is not in her right mind but Raavi tells Dhara she needs to understand that Shiva is still alive.

Suman wipes her tears and agrees with Raavi as she slides her golden bangles into Raavi’s hands that Shiva gave to Suman.

However, Kanta asks Raavi to remove her mangal sutra since her husband is dead now.

Raavi refuses to do so as Shiva is still alive as long as Raavi breathes.

Dhara supports Raavi and asks Kanta why it is only women who have to sacrifice everything for their husbands.

Why can’t they still put on a bindi and wear bangles that are a reminder of her loving husband?

Rishita supports Raavi as Raavi asks Gomby one more time to remove the ashes inside the mud point.

Meanwhile, Shiva is still alive, lying unconscious near a river bank in a village.

As the village women walk toward the river, they spot Shiva’s body and call one of the male members who calls the police to identify Shiva as he is still alive and not dead.

On the other hand, Prafulla asks Raavi to accompany her back home as Shiva is no longer alive.