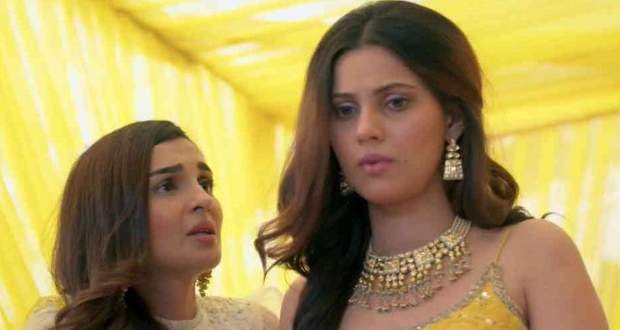 Today's Pandya Store 17th March 2022 episode starts with Dhara and Rishita intoxicating Raavi and getting her drunk forcefully to avoid any hurdles in their plan.

Meanwhile, Shiva finds out the outfit which Raavi had bought the other day. He asks Dhara about this matter and gets skeptical about the sudden wedding plans.

Later, Prafulla and Suman gather information from the taxi rental service about the Pandyas.

Meanwhile, Raavi manages to escape out of the room and bumps into Shiva.

Shiva holds Raavi in her arms as Raavi sinks in his heart and glances at Shiva. Raavi feels dizzy and blushes as she meets her beloved Shiva.

Later, Shiva realizes that Raavi is intoxicated and gets angry. He asks Raavi how she manages to let down everyone at the same time.

Meanwhile, Raavi expresses her love for Shiva but Shiva could not hear anything against his anger. He asks her to tell the name of the person who got her drunk.

Later, Krrish gets stunned at watching Raavi and Shiva together and tries to take Raavi back in her room.