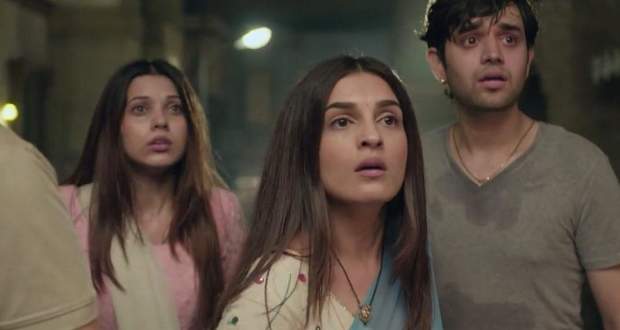 Today's Pandya Store 17th May 2022 episode starts with Raavi overthinking the Dev-Rishita incident. She thinks that ever since she got married to Shiva, all the problems have started.

Shiva calms her down and tells her that after their marriage Janardhan is filled with hatred and leaves no stone unturned to seek revenge on the Pandya House.

Meanwhile, Shiva gets a call about the store catching fire and everyone runs toward the store.

Janardhan tells Kamini that it is not just the Pandya store, but the whole Pandya family has caught fire.

The Pandya brothers, lose their control after seeing their father's dream being burnt down to ashes.

Gautam tries to jump into the fire while Dhara and Shiva hold him tight.

Feeling devastated, Gautam starts remembering his father’s words and the responsibility put over his shoulders. He remembers how hard everyone in the house has worked for the store.

Raavi, Dhara, Shiva, Gautam and Krish try everything in their control to stop the fire but the fire doesn’t seem to get low.

The whole family is traumatized by this incident.

Gautam can’t seem to stop himself from jumping into the fire over and over again. He sees his father’s photograph being burned.

Dhara, Raavi, Shiva and Krish go into flashbacks of the store.

Dhara asks Raavi to call the fire brigade while everyone helplessly keeps looking at the burning store.

Dev is informed about the fire incident and he cannot believe his ears and rushes back to the store.

Dhara on seeing Dev runs towards him and hugs him.

After the fire has subsided, Gautam runs into the store to only see everything turned to ashes.

Dejected Gautam sits in the corner bawling his eyes out.

While crying he finds a bracelet fallen near him. He immediately realizes that it was the same bracelet that Dhara had gifted Dev at the function.

Gautam runs towards Dev and slaps him hard.

Everybody is shocked to see Gautam’s sudden gesture.

Dhara meddles in order to stop Gautam from hurting Dev while he further accuses Dev of purposely burning the store along with Janardhan.