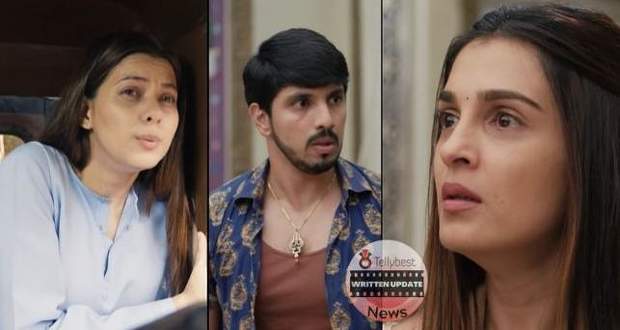 Today's Pandya Store 17th November 2022 episode starts with Dhara apologizing to Shiva and asking him if he thinks Dhara could do such a thing.

Dhara’s voice begins to crack and she says that she has always wanted a child and how she could suggest someone else get an abortion.

Shiva questions Dhara then why was Arnav at the hospital, holding Raavi’s hand.

Rishita butts in saying that she informed Arnav where Raavi was.

Suman is shocked to hear this and asks Raavi if all this was true.

Raavi defends herself and tells Suman that she did hold his hand but only because she was scared of the injection the nurse was about to give her.

Shiva interrupts Raavi and accuses her of having extramarital affair with Arnav.

Hearing this unable to stop herself, Dhara angrily grabs Shiva’s collar and raises a hand to hit him but stops.

Dhara suggests to Shiva before it’s too late he should mend things else he will be left with nothing but regret.

Suman tells Shiva to calm down but Raavi interrupts and says that Shiva needs mental treatment because Shiva doesn’t get that Arnav is just Raavi’s boss nothing else.

Suman is aggravated by such accusations against her son and asks for proof of Raavi’s and Dhara’s innocence.

Dhara tries to defend Raavi but Suman asks them if they ordered a pregnancy test kit to play doctor.

Hearing this, Dhara gets quiet since she has no answer to it

Shiva also tells everyone that this wasn’t the only thing and narrates how he has noticed Raavi has been coming home with Arnav and also gave him an expensive gift and a cheap one to her husband.

Raavi tries to defend herself helplessly, but Shiva keeps accusing Raavi of her unknown relationship with Arnav.

Dhara slaps Shiva and asks everyone to speak up to Shiva that he is accusing Raavi wrongly.

Dhara says this is all wrong and she will never forgive Shiva.

Suman defends Shiva but Raavi tells her that if even Suman doesn’t believe her she should leave the house.

Everyone is shocked, and Shiva tells Raavi that she should leave and no one would stop her.

On the other hand, Shweta enjoys the fight in the kitchen while pouring water.

Dhara asks Gautam to speak something as the Pandya family is ready to break on a piece of paper.

Shweta brings out water and tries to defend Dhara and Raavi.

Shweta says that Dhara was the only reason why she and Krish got married while everyone looks confused.

Instead of defending Dhara, Shweta worsens the situation even more by spilling how Dhara already knew about Deven and the stealing but she kept it a secret till now.

Everyone is shocked and feels betrayed by Dhara.