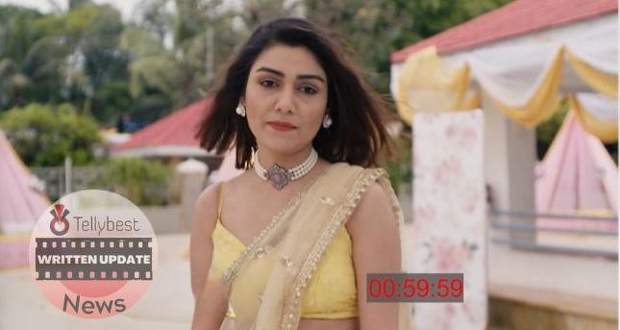 Today's Pandya Store 17th October 2022 episode starts with Krish and Shweta doing the pheras while Raavi and Rishita watch them with wide eyes.

Raavi questions Rishita if they should stop the pheras but Rishita mutters under her breath that if she tries to stop the marriage then Suman would get her out of the house.

On the other hand, while Dhara is running with the bag, Gautam starts following her.

Meanwhile, the pandit urges someone to pass the sindur and Rishita quickly gets up to the mandap and hides the sindur under her dupatta quickly.

Everyone in the family is searching for the sindur while Rishita pretends not to find it.

The pandit however comes forward and unfolds Rishita’s hand to take the sindur.

Making a sheepish face, Rishita lowers her head to place the sindur on the tray but makes it fall intentionally.

Krish then comes forward to take the tray from Rishita’s hand But Rishita starts tugging the tray.

After taking the tray away, Krish fills Shweta’s hairline with sindur while everyone happily claps for them except Rishita and Raavi.

Shweta gets an SMS notification on her phone just then from Deven which reads Dhara knows the truth about Shweta and that she will soon go to jail.

While Suman plans to scold Dhara as soon as she finds her for ditching the wedding, Shweta looks at walking Dhara with terror on her face.

Rishita along with other members also notices Dhara and gets stunned to see her in scattered clothes and open hair.

Shiva quickly wraps a dupatta around Dhara and Gautam also arrives there and asks Dhara about her whereabouts.

Instead of answering, Dhara points a finger toward Shweta but Shweta smartly moves aside so it looks like Dhara is pointing toward Krish.

Krish looks at Dhara with confusion while Shweta pretends to fall unconscious to avoid Dhara.

Dhara also falls unconscious suddenly and Gautam takes her to the room quickly.

Looking at Shweta, Rishita firmly declares Shweta is acting but Raavi goes to sprinkle some water on Shweta’s face.

Later, in the room, Rishita tells Dev that she will stay with Dhara to take care of her.

Shweta who is overhearing the conversation decides to open her eyes.

Looking at Shweta, Dev tells Rishita to come with him but Rishita firmly announces she will stay with Dhara.

Shweta in her weak voice tells everyone that she got scared seeing Dhara standing there like this but Rishita questions her why she was so scared of Dhara.

Before Shweta can answer, Chutki starts crying and Rishita leaves the room with Dev reluctantly.

© Copyright tellybest.com, 2022, 2023. All Rights Reserved. Unauthorized use and/or duplication of any material from tellybest.com without written permission is strictly prohibited.
Cached Saved on: Monday 21st of November 2022 08:52:50 AMCached Disp on: Friday 9th of December 2022 04:47:20 AM