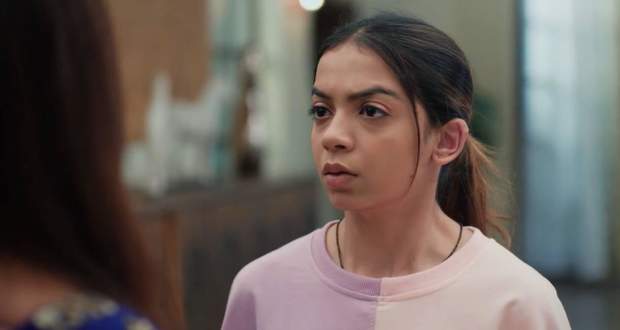 Today's Pandya Store 18th April 2022 episode starts with Suman being taunted by some ladies regarding Dev and Rishita leaving the Pandya house.

Suman rebukes them and moves from them to find Dev and Rishita entering the anniversary party.

The Seth family comes for the party, Dev gets happy seeing the arrangements.

Gautham hugs Dev and wishes the couple, while Shiva and Raavi refuse to talk.

Dhara overhears Janardhan’s and Kamini’s plan to gift Dev and Rishita with some documents.

Janardhan says that his gift would split the Pandya family.

Dhara on hearing this plans to give Dev and Rishita the documents that she had before Janardhan.

Dev sees Suman, he bows and touches her feet, however, Suman insults him.

Janardhan, Kalyani and Kamini enter and greet Suman while Suman greets them with resentment.

Later, everyone has a great time dancing, while Gautham and Dhara are anxious.

Dhara manages to get Dev from the party and Suman sees them leaving and gets suspicious.

Meanwhile, Shiva finds that Raavi is not wearing the anklet and asks her about it.

She tells him about her challenge to Rishita, to not wear the anklet until she gets Shiva educated.

Shiva gets furious at her concealing it from him and promises Raavi to study.

Meanwhile, at the party, Dev and Dhara are missing.

Janardhan and Kamini get worried that Dhara would spoil their plan.

Suman takes Dhara home faking a stomach pain, while Dev was away and threatens her to jump into the well.

She fears that Dhara’s plans would slit the family and asks her to stay in the house.

She asks Dhara to lock herself in the room and throw the key through the window.

Dhara gets tensed and pleads with Suman to leave her at the party, but Suman stays stubborn.

Later at night, the house catches fire due to a short circuit, Suman calls for Dhara but she doesn’t respond.

Suman calls Gautham but he doesn’t pick up, Suman is left helpless at the house.