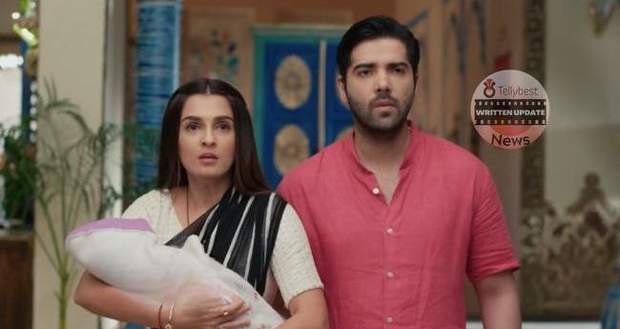 Today's Pandya Store 18th August 2022 episode starts with Shiva sitting at the entrance of the Pandya House and thinking about Chiku’s Nani.

Suman sees Shiva sit in the dark and asks him what is he doing while Shiva lies and says he is just tired.

In reality, Shiva doesn’t go inside the house and sleeps at the doorstep.

When the morning light hits his face, Shiva wakes up and hastily goes inside the house so no one sees him and questions what he was doing all night at the entrance.

However, Raavi stops his way and gives tea to him.

Shiva asks Raavi for a favour and says she just needs to stand at the doorstep and not move even if God comes.

Raavi nods while Shiva goes to take a shower.

Soon, all the other members of the Pandya Family wake up with Dev helping Rishita to walk.

Suman advises Dev to call Janardhan and Kamini about the baby girl but Dev says they do not deserve to know about Rishita and Dev’s little "chutki".

However, Suman says Janardhan and Kamini have an equal rights over Rishita’s baby.

On the other hand, Dhara calls Raavi to get Chiku’s clothes while she bathes him but Raavi cannot leave the doorstep until Shiva comes.

However, Raavi has to go inside to fetch Chiku’s clothes on Suman’s insistence while Shiva emerges from the bathroom.

When he doesn’t find Raavi standing there, he scolds her.

Shiva rushes to stand at the doorstep and sees Swetha’s father and mother coming inside the Pandya House.

Swetha's mother says she is here to take Chiku from the guardianship of a woman named Dhara.

Dhara gets shocked and holds Chiku closer to her bosom while Shiva scolds Raavi for being so cold-hearted and for leaving the doorstep alone when she could have saved Dhara from this ugly confrontation.

However, Raavi says this was bound to happen one day.

Dhara asks Swetha’s mother why did Swetha even leave her baby like this and did not take him when Dhara herself came to give Chiku back to her.

Dhara further says she cannot trust Swetha with Chiku and a mother is not always the biological mother.

Swetha’s mother tells Dhara that Swetha fell in love with a boy who impregnated her and later stole all her money and jewelry leaving a pregnant Swetha alone to fend for herself.

Suman politely tells Dhara she knew this would happen one day while Dhara hesitates to keep Chiku apart from herself.

© Copyright tellybest.com, 2020, 2021. All Rights Reserved. Unauthorized use and/or duplication of any material from tellybest.com without written permission is strictly prohibited.
Cached Saved on: Sunday 2nd of October 2022 03:47:12 AMCached Disp on: Wednesday 5th of October 2022 05:12:25 PM