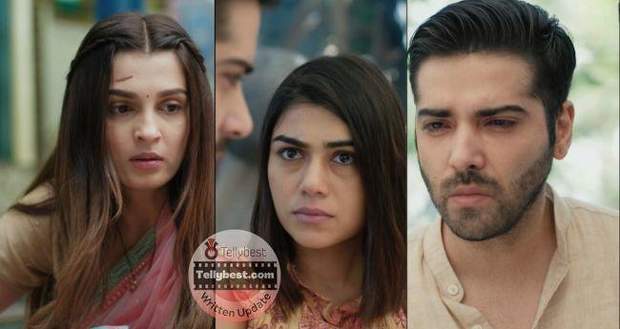 Today's Pandya Store 18th December 2022 episode starts with Dhara telling Dev that she does not want the saree and that if he wants he can give it to Rishita.

While Rishita yells that Dev should have asked Dhara before buying the saree, Dev orders Rishita to close her mouth.

After Dhara and Gautam walk away, Shiva stands up and announces he is taking food for Dhara, but Krish offers to take it, leading them to argue with each other.

Suman orders both of them to close their mouth while yelling that everyone needs time to move on from Chiku’s love but it will only happen if Dhara and Gautam stop being grumpy and start smiling.

Meanwhile, in the room, Dhara questions Gomby about what is bothering him, and Gomby reveals to her how he was upset in the shop but none of his brothers ask him what has happened.

Gomby even tells Dhara that these three brothers don’t consider them their own family so it will be better if Dhara understands it too.

Dhara gets shocked to see Gautam behaving this way but when she urges Gautam to reveal why he is upset, Gautam announces he does not want to give Dhara false hope and goes to sleep leaving Dhara confused.

The next morning, while Dhara is playing with Chutki, she gets sad again thinking about her sweet memories with Chiku and Rishita arrives there just then to take Chukti in her hand.

Looking at Dhara, Rishita thanks her but Dhara walks away without uttering any word.

Dev and Shiva enter the home at the same time and make Dhara sit on the swing as they have something to show her.

Suman who was also entering the hall questions Dev and Shiva if it is property papers and Dhara gets stunned when Shiva and Dev both reveal that they have changed their names into “Shiva Dhara Pandya” and “Dev Dhara Pandya”.

Dev and Shiva then ask Dhara if she really believes now that they consider her a mother and Suman emotionally mutters today Dhara has snatched her sons from her in papers too by erasing their father’s name.

On the other hand, while Gautam and Krish are working in the shop, the dealer arrives there with goods for the shop and Gautam orders him to place these products in the godown.

When Krish walks out of the shop, he gets shocked to see the cheap quality products in the truck.

In the meantime, in Pandya’s house, Dhara tells Suman emotionally that she will never take Shiva and Dev away from her but Suman still complains to her for taking her sons away with tears in his eyes.

Suman even reminds Dhara that no matter how much Yashoda loves Krishna, Devki will always be called his mom, not Yashoda.

Dhara gets stunned after hearing Suman’s words and Dev tells Suman that it will never change the fact that she is their mother.

Suman, however, questions Dev about how he will feel if his name is replaced in Chutki’s birth certificate but Dev and Shiva both try their best to change Suman’s mood.

Meanwhile, in the shop, Krish tries to stop Gautam from buying these cheap products but Gautam throws him away after emotionally informing him that this is the only way he can manage the money.

Later, on one hand, Krish goes to scold Shweta for doing this; on the other hand, food department officers decide to investigate shops to check if they are keeping mixed cheap quality products after getting a call from a random person.