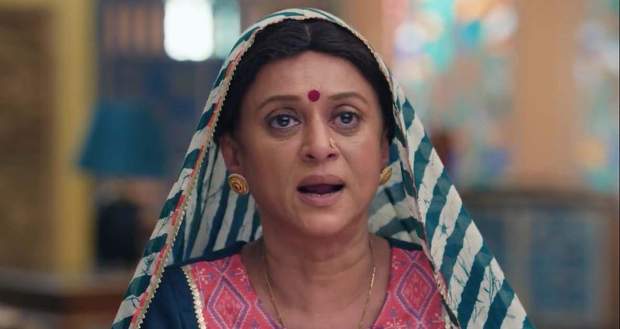 Today's Pandya Store 18th July 2022 episode starts with Krish telling everyone that Janardhan has agreed to his and Keerti’s marriage.

Suman along with others gets shocked to hear that and asks Krish if what he is telling is true.

However, Krish reveals that Janardhan has imposed one condition for the marriage and that Krish has to leave the Pandya family and live with them as their “ghar-jamai”.

Hearing that, Suman shouts that she knew something like that must have happened and asks Krish how he answered Janardhan.

Krish remains silent while Suman boasts about how Krish will never think of ditching his family for a girl.

Shiva grabs Krish’s collar and asks him what his answer is and quickly understands when he sees Krish standing silently.

Shiva says that Krish has made his decision about leaving the Pandya family to go and live with Keerti in that house.

Arguing with each other, Shiva and Krish almost get into a fight but get stopped by Gautam and Dev.

Suman wails with tears about how her family is falling apart with all types of mishaps coming one by one.

She asks Krish if she, Gautam, Dhara, and his brothers mean something to him at all.

Krish tells Suman that they approved Dev and Rishita’s marriage when they ran away together so why they cannot accept him and Keerti.

Rishita warns Krish not to compare his situation with theirs as many things are different.

Meanwhile, Kamini questions Janardhan’s decision of agreeing to Krish and Keerti’s marriage after discovering it.

Janardhan tells Kamini that he is using this opportunity to take revenge on the Pandyas for snatching his daughter from him.

At the same time, Dhara tries to persuade Krish by talking to him calmly but Krish rejects Dhara’s words.

Krish tells Dhara that he is an adult now and does not require Dhara’s guidance in everything.

Dhara feels disappointed after hearing Krish and asks him if he needs her to go and talk with Janardhan about his marriage.

Later, Rishita goes and confronts Janardhan about trying to take revenge on her family.

Dev warns Janardhan that even if Krish agrees to stay with them at first, he has the blood of Pandyas in him and will soon decide to leave.

If that happens, Keerti will also have to leave that house with Krish.