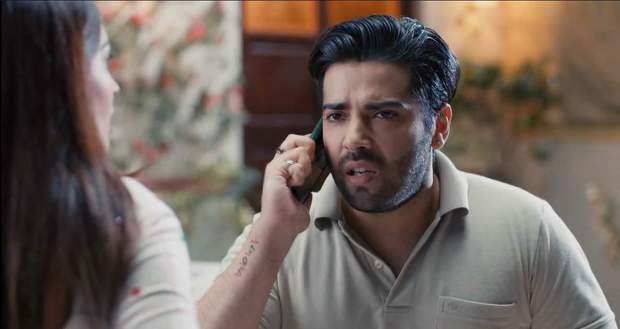 Today's Pandya Store 18th May 2022 starts with angry Gautam asking for a confession from Dev. He is alleged to have done this to bring Gautam and everyone on the streets.

He says that Dev had planned it all along so that the Pandyas have to starve.

The CCTV footage shows Dev being near the store before the fire. Shiva gets furious and grabs Dev by the collar.

He takes his phone to call the police when Dhara steps in. She angrily stops Shiva from calling the police.

She is certain that Dev wouldn’t do such a thing. Dev tries to explain his side of the story and begs Gautam to believe him.

Dhara reminds Gautam that Dev is his brother and he has been raised well and refuses to believe that Dev could do this.

Helpless Dev says that it’s okay if no one believed him. He says that if Gautam feels that Dev has done this, he will go and surrender himself to the police.

Dhara stops him from doing so to which Dev replies that it’s not just the store but their relationship has caught fire.

Having said that both of them leave.

In the meanwhile, Suman wakes up in the middle of the night feeling restless.

When she gets out of her room, she finds the main door open and nobody at home. She feels as if something is wrong and continues feeling restless.

Rishita is worried about Dev’s absence. Janardhan tells Rishita about the Pandya store incident and also tells her that Dev has been accused of setting the fire.

Rishita is shocked to hear this. Janardhan tells her that he has kept a lawyer ready incase if the Pandyas file a complaint against Dev.

While Janardhan and Rishita are having this conversation Dev enters. Rishita tries to talk to him but he is in no mood to talk.

Devastated Pandyas return home. Suman is worried to see them in this condition.

Dev is sitting in a corner crying remembering everything Gautam said to him. Rishita tries to console him.

Dev hugs Rishita and tells her about the store while Gautam kneels before Suman and informs her about it too.

© Copyright tellybest.com, 2020, 2021. All Rights Reserved. Unauthorized use and/or duplication of any material from tellybest.com without written permission is strictly prohibited.
Cached Saved on: Monday 3rd of October 2022 09:07:27 PM