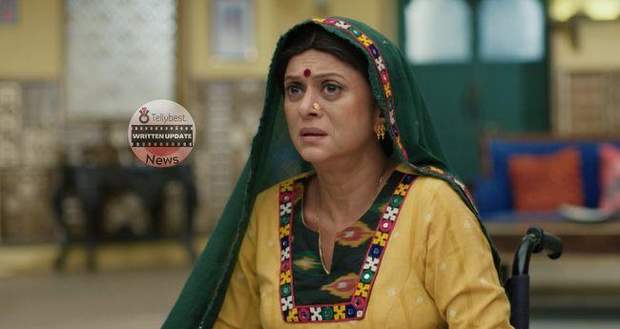 Today's Pandya Store 18th November 2022 episode starts with Swetha telling everyone that her and Krish’s marriage happened only because of Dhara.

Swetha worsens the situation even more by spilling how Dhara already knew about Deven and the stealing but she kept it a secret till now.

Suman interrogates Dhara if she knew the truth about Swetha while Gautam and Krish ask Dhara the same.

Dhara builds up the courage to speak and tells Suman that she knew about Swetha all along.

Suman shouts at Dhara saying that Dhara is a runaway’s daughter and she had no right to ruin Krish’s and Shiva’s life.

Suman’s voice breaks as she says that her children thought of Dhara as their mother and Dhara forced both Krish and Shiva into bad marriages.

Swetha tries to calm Suman by giving her water but aggravated Suman flips the tray over and warns Swetha to not bring her face in front of her again.

Suman grabs Dhara’s hands and desperately asks Dhara to tell her why she ruined Suman’s son’s life, those sons who trust Dhara even more than their own mother.

Suman shoves Dhara back and turns away from her feeling betrayed.

Shiva then insults Dhara and Raavi while Raavi tells him to stop.

Raavi tells everyone that no one is interested in knowing the truth so she won’t prove herself any further.

Dhara panics and tells everyone that there were two doctors who checked Raavi's ultrasound.

She doesn't know their names but can recognize their faces and at least one of them can prove Raavi's innocence.

Raavi arrogantly tells everyone that she is leaving and doesn’t have to prove anything to anyone, she looks at Shiva and says that if anyone wants any proof they can go to the doctor themselves and goes to pack her bags.

Swetha cooks up another plan and calls her parents to entice them against Dhara.

Dhara asks Shiva and Suman to stop Raavi but instead, Suman tells Dhara to leave.

Meanwhile, Shiva breaks down and falls in Suman’s lap and Suman assures him that she won’t let anything happen to him.

After some time, Rishita reaches the hospital and inquires about Raavi’s surgery to the doctor who also happens to be the friend that Swetha had bribed.

© Copyright tellybest.com, 2022, 2023. All Rights Reserved. Unauthorized use and/or duplication of any material from tellybest.com without written permission is strictly prohibited.
Cached Saved on: Monday 21st of November 2022 12:43:30 AMCached Disp on: Thursday 1st of December 2022 01:38:34 AM