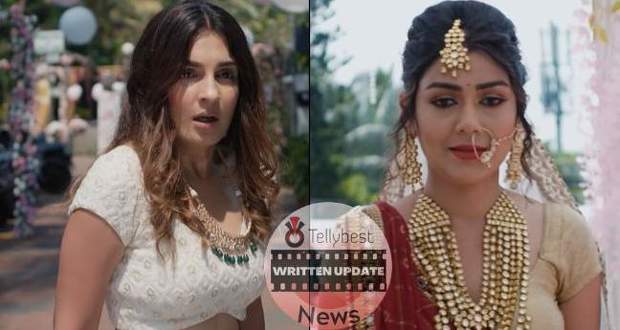 Shweta tells Rishita that now she wears Krish’s sindur but Rishita sarcastically remarks that Shweta has learned the value of a little bit of sindur.

Before Shweta can say anything in response, Gautam urges everyone to start packing so Rishita leaves.

Meanwhile, Shiva tries to help Raavi with packing but Raavi refuses to take the help.

Shiva gets blind with anger when Raavi mentions that she does not want Shiva to accuse her of everything.

Shiva then yells that he is tired of Raavi blaming him for everything but Raavi just stares at him.

Rishita, on the other hand, tries to go to Dhara’s room but Dev stops her and the jewelry bag falls from her hand.

Confused Dev questions Rishita about the jewelry and announces that Rishita can’t leave without telling him the truth.

Rishita then informs Dev that Shweta was trying to smuggle these original jewels and she has replaced them with fake.

She further adds that she will not let Shweta’s vidayi happen till she reveals Shweta’s truth while Dev looks at her with wide eyes.

On the other hand, Shiva breaks the handle of Raavi’s bag in rage and starts screaming that he cannot beg Raavi’s forgiveness anymore and Raavi also tears Shiva’s bag.

Shiva announces that he does not love Raavi when Raavi accuses him of being arrogant and not caring about her.

Shiva, however, questions Raavi about not texting him and walks away from the room in a rage.

After Shiva walks away, Raavi curses her luck for falling in love with Shiva.

Meanwhile, Dhara gets shocked to see Shweta walking towards her with a piece of broken glass.

Dhara lets out a scream and quickly sits on the bed due to which Shweta gets distracted and cuts her wrist.

Before Dhara’s feet can touch the ground, Sweta stops her by announcing she has spread the broken glasses on the floor so she can tell Dhara the truth.

Dhara, however, does not believe her and decides to call Gautam.

Elsewhere while Gautam is thinking about Dhara’s disappearance during the wedding, Shiva arrives there in a foul mood and Gautam questions him if he has again argued with Raavi.

Pressing Shweta to the door, an angry Dhara lashes out at Shweta for stealing, and questions her why she kept Deven who is Chiku’s father silent.

Before Dhara can walk away, Shweta requests Dhara to listen to her one time.

Meanwhile, Rishita arrives at the hotel lobby and tries to tell Suman the truth about jewelry but Dev arrives there and takes Rishita away on the shoulder.

Shweta tries to change Dhara’s mind but Dhara is firm in her decision and Krish is walking toward Dhara’s room with Chiku.

© Copyright tellybest.com, 2022, 2023. All Rights Reserved. Unauthorized use and/or duplication of any material from tellybest.com without written permission is strictly prohibited.
Cached Saved on: Monday 21st of November 2022 02:28:17 AMCached Disp on: Friday 9th of December 2022 04:48:29 AM