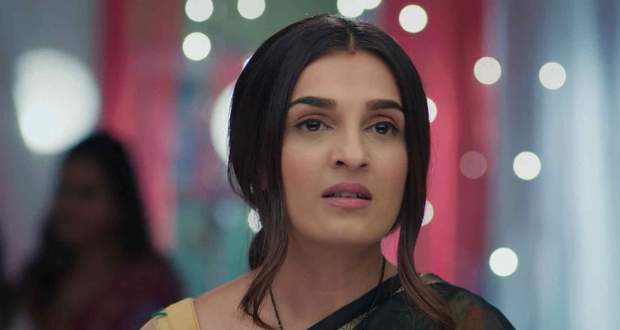 Today's Pandya Store 19th April 2022 episode starts with Suman crying and calling out for Dhara to help her.

She starts crawling over the stairs but her legs get caught between bag straps, making it unable for her to move.

Meanwhile, Kanta enters the Pandya house and Suman tells her that Dhara was locked up and seeks help.

More people come to help and the fire force arrives, further, Gautham, Shiva, and Raavi are informed about the fire.

Gautham breaks open the room and all three of them start searching for Dhara.

Everything in the room was burnt, the smoke and dust block their vision.

Gautham gets emotional and wails as he finds ash heaps, he gets worried about Dhara.

Shiva and Raavi console him, however, Gautham starts crying.

Later, they are asked to leave the room by the fire force officer.

Meanwhile, Dev is trapped in the Pandya store godown where Dhara had locked him.

The whole family is in dejection as they see Gautham cry out.

Later, the officer informs them the room has no evidence of burnt bodies.

They suggest that Dhara might have escaped through the window, this brings relief to the family,

Suman says Gautham that she had asked Dhara to lock herself, to prevent her from dividing the Pandya store and giving Dev his portion.

She tells him that Dev and Rishita might return on giving the share of the store, but wouldn’t stay longer.

Shiva tells Gautham that he could give his share to Dev as well when Gautham tells them that he felt lonely.

At the party, Rishita is worried about Dev while Janardhan takes the opportunity and accuses the Pandya family of Dev’s missing and for leaving her alone.

Dev breaks a windowpane and escapes from the godown.

He goes to the party and starts searching for Dhara and informs Rishita and the Seth family that Dhara had locked him.