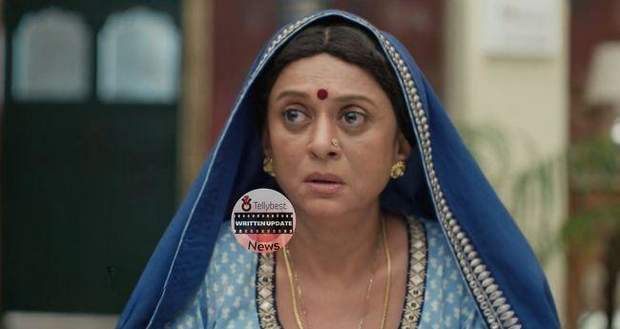 Today's Pandya Store 19th August 2022 episode starts with Dhara hesitating to give Chiku back to Swetha.

Gomby looks at Dhara softly while Dhara tells Gomby not to take Chiku away from her.

Gomby says who is he to take Chiku away when Chiku was not even Dhara’s?

Dhara shakes while crying as Suman tries to hold her hands to calm her down.

Unable to see tears in Dhara’s eyes, Dev tells Dhara not to belittle her heart since she has chutki to take care of too.

Dev takes his baby girl away from Rishita and gives her to Dhara.

Meanwhile, Janardhan & Kamini’s car hits Krish and all the toys in his hand fall on the road.

She peeks inside the Pandya House and feels bad that Pandya Family did not even inform them that Rishita had a baby.

Rishita feels anxious and takes chutki back in her lap, saying chutki must be hungry.

Dhara’s hand feels empty and she goes into her room crying while Suman says no matter how ugly the truth is, one has to accept it.

Dev tells Rishita that what she did outside was not good.

However, Rishita says she is scared of Dhara’s obsession with kids and does not want to confuse her baby girl thinking she has two mothers.

Dev tells Rishita that Dhara has full rights over chutki as her big mother and Rishita agrees but she says chutki can only have one mother.

Dev leaves wordlessly and goes to Suman’s room to express his dilemma.

Dev puts his head on Suman’s lap and says Dhara is the one who brought him up while Rishita is the one, he loves.

He says he is very happy to be a father but feels extremely sad to see Dhara’s motherly lap empty after Chiku went away.

On the other hand, Swetha and his parents try to calm down a crying Chiku but he doesn’t stop.

Swetha says Chiku has a fever.

A similar thing happens with Dhara as she cannot stop crying and hugs Gomby.

She asks Gomby if she can video call Chiku since his face is not going away from her mind.

© Copyright tellybest.com, 2020, 2021. All Rights Reserved. Unauthorized use and/or duplication of any material from tellybest.com without written permission is strictly prohibited.
Cached Saved on: Saturday 1st of October 2022 09:10:46 PMCached Disp on: Wednesday 5th of October 2022 05:14:22 PM