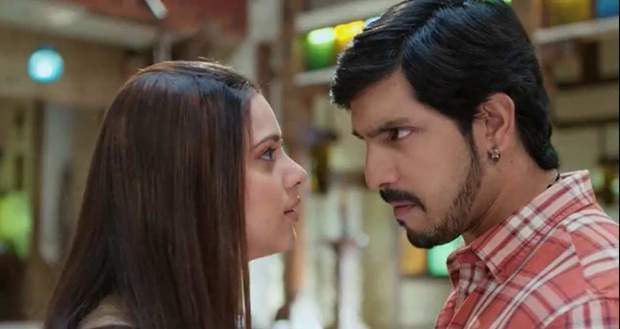 Today's Pandya Stores 19th February 2022 episode starts with Krish showing the CCTV footage to all the members of the Pandya Family.

However, Krish almost gets caught going in an autorickshaw with Kirti when the CCTV plays.

Krish makes an excuse when Rishita coaxes him to slow down the pace.

The CCTV footage later shows Prafulla entering the street paving the way to Pandya Family’s residence and giving money to the cowherd man.

Just then, Raavi is also seen in the CCTV footage and her face warps in sadness when Suman looks at her with deeply suspecting eyes.

Suman speaks of the incident performed by Prafulla years ago that killed her husband and made Suman a widow at an early age.

With this statement, Suman equates Raavi with the same evil blood that flows through both Prafulla’s and Raavi’s veins.

On the other hand, Kamini advises Prafulla to send a saree and a box of sweets for Raavi as a courier.

Prafulla calls Raavi and Shiva puts the latter’s phone on the loudspeaker.

Unable to explain herself, Raavi burns the box of sweets and the saree and pledges that she has been honest and has nothing to do with Prafulla’s evil intentions.

Suman yells at Raavi and after the former’s outburst, Raavi promises she will prove her innocence in one week.

The next morning, after Rishita leaves for her work trip and Dhara is preparing food, Raavi packs her bags and leaves to live with Prafulla.