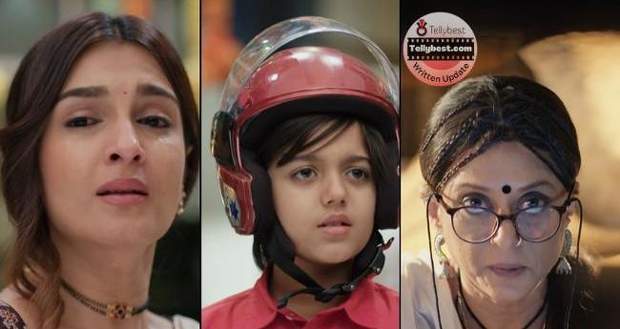 Today's Pandya Store 19th January 2023 episode starts with Krish telling his friend on call that there is a party at his home so he is going home for now as he is living in Canada now.

Krish then gets a call from his dad, whom Krish tells that he is coming home soon.

Back in Pandya’s house, Chiku urges Gautam to come to terrace with him so they can fly kites together and Gautam starts joining all the kites that have the names and pictures of the rest of the Pandya family members.

At the same time, some kids make fun of Gomby by advising him to add some more kites together so Gomby will also be able to fly after sitting on it.

While Gautam just smiles, Chiku puts a fake lizard on one of the boy’s shoulders which scares the boy and Chiku threatens to put a real lizard if he mocks Gautam again.

Looking at this, Gautam gets emotional and he embraces Chiku in a hug while Dhara also joins them.

However soon, Dhara goes stiff and comes out of Gautam’s touch while Gautam also looks away since their relationship is strained now.

A new beginning for Dev and Rishita

On the other hand, in Ahmedabad, Rishita gets a call from Sesh’s (her son) teacher who starts complaining about Sesh.

She also tells the teacher that every teacher loves him very much since he is very sweet while Sesh is drawing in his room.

Once she cuts the call, she finds Dev looking at the family picture with Chutki in it with sad eyes.

Dev reminds Rishita that it is Uttarayan today when they lost their Chutki and now Rishita wants to send Sesh to a boarding school.

Rishita tries to justify her decision by saying that they are both working so they will not be able to take care of Sesh.

When Dev mentions that he will take care of Sesh, Rishita angrily questions him if they should go back to Somnath as they will not be able to afford this lavish lifestyle with her salary only.

Feeling tired of seeing Rishita’s distant behavior toward Sesh, Dev tells her now he thinks they should not have planned another baby causing Rishita to stop on her track for some moments.

Meanwhile, in Pandya’s house, Dhara, Chiku, and Gautam are climbing the stairs when Gautam asks Chiku master which stair leads to the terrace since his drunk mind is seeing three different stairs.

Gomby also mumbles that these stairs are moving but angry Dhara reminds him that he is the one who is moving.

Chiku then gives support to Gautam as Gautam is stumbling on his feet very much.

In the meantime, Shiva is busy drawing Pandya store image on the wall when Raavi smudges the drawing.

Getting angry, Shiva turns to scold Raavi and Raavi puts a laddu in his mouth but she gets angry as Shiva mentions it is not made by Dhara.

Dragging Shiva into the hall, Raavi urges him to look around to see that they are living in Baroda and this is their home, not Pandya Nivas.

However, instead of accepting this truth, Shiva informs Raavi that Dhara has changed the colors of the rooms that’s why Raavi is not able to recognize it.

Shiva even tells Raavi that he will consult good psychiatrists to get Ravi’s mental condition treated.

Afterward, while Ravi is making Shiva understand that their life changed, Mithu (their son) arrives there and Shiva again urges him to the roof to fly kites with the other family members.

Back in Ahmedabad, Dev screams at Rishita when she tries to hit Sesh for stealing money to buy kites but Rishita announces that Sesh is going to boarding school.

Meanwhile, Dhara and Gautam get emotional when they start flying the kites together as their happy memories flash before their eyes whereas Suman curses Dhara as she thinks she has done black magic on her so she is feeling pain.

© Copyright tellybest.com, 2022, 2023. All Rights Reserved. Unauthorized use and/or duplication of any material from tellybest.com without written permission is strictly prohibited.
Cached Saved on: Wednesday 25th of January 2023 09:06:44 AMCached Disp on: Tuesday 31st of January 2023 07:15:42 PM