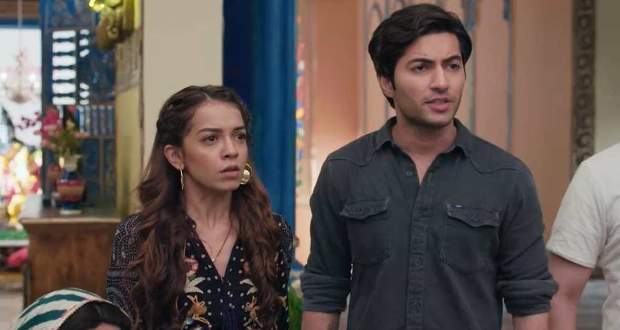 Today's Pandya Store 19th July 2022 episode starts with Dev threatening Janardhan to keep Kirti in the Pandya house with all the love if she marries Krish.

However, Rishita interrupts Dev and says she does not want her sister to get married in the Pandya House.

Dev looks threateningly at Janardhan before leaving with his angry wife.

Kamini tells Janardhan that what Dev’s said is true; Krish can change his mind after the marriage and might not stay in Seth Mansion.

On the other hand, Shiva gets noticed by a happy couple who watch Raavi's vlogs.

The married woman tells Shiva how much she adores his rough romance with Raavi and wants her husband to do the same.

Meanwhile, Krish tells Kirti that he won’t be moving to her house after they get married.

Krish also instructs Kirti to start packing so they can elope and get married to each other secretly.

However, Kirti does not know about Krish’s lack of money in his pockets and is already daydreaming about going on a honeymoon.

During dinner, Krish makes a scene by not eating the food, telling Dhara he is not a little kid anymore.

Suman sarcastically replies saying, of course, Krish has graduated from being a little kid to someone who is ready to get married.

She gets hurt and asks Gomby if it is wrong to love Krish like her own son.

However, Gomby feels Dhara’s love has made all the younger Pandya brothers fearless of Gomby’s beating.

Meanwhile, an irritated Shiva approaches Raavi and turns off her phone while she is on a live stream.

Shiva tells Raavi she does not need to put her personal life online for strangers to watch.

Shiva says he sees himself in Raavi’s eyes and his presence inside her eyes is enough for their love to survive.

On the other hand, Suman calls upon everyone in her room when she sees someone has stolen the money from her cupboard.

Rishita feels it is Krish who has stolen the money but Suman cannot believe it.

Suman then decides to do an investigation of her own to catch the culprit.

Meanwhile, while Kirti is escaping her house to elope with Krish, she gets caught by Janardhan and Kamini.

© Copyright tellybest.com, 2022, 2023. All Rights Reserved. Unauthorized use and/or duplication of any material from tellybest.com without written permission is strictly prohibited.
Cached Saved on: Monday 21st of November 2022 02:25:12 PMCached Disp on: Thursday 1st of December 2022 11:01:38 PM