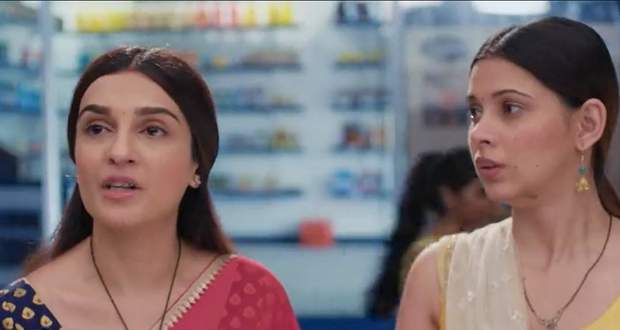 Today's Pandya Store 19th May 2022 episode starts with Gautam bawling his eyes out in front of Suman and telling her that their store is burnt down to ashes.

When Shiva shows her the burnt picture of their father, Suman is too stunned to speak.

Dev also tells Rishita about the incident. He is extremely worried about everyone and tells her how devasted Gautam was.

He says that he completely understands why Gautam blamed him for the incident and now genuinely wants to help the Pandyas rebuild the store.

The next day, Suman along with Gautam, Dhara, Shiva, and Raavi go to the store.

Suman goes into flashbacks about the store. She is broken and remembers how hard she and her husband have worked for the store.

Dhara consoles Suman and says that even if the store has been set on fire, their courage remains intact and says she will do everything to rebuild the store.

All of them go inside the store to get the things that are in good condition out of the store. Shiva, Gautam, and Krish say that they will start working to earn money for the store.

Dev overhears the conversation and hands over an envelope of money to Gautam.

Gautam feels sorry for Dev for slapping him and hugs him. Dev says that the money is from the profits of his store.

Gautam still denies it and says that the store is built from Janardhan’s money and he doesn’t want to take any money from Janardhan.

Suman asks Dev to return back to the Pandya house, but Rishita denies it. Dev feels disheartened that his brothers won’t take his help.

Janardhan in the background is extremely happy looking at the distanced brothers.

Shiva starts working as a tempo driver and is ridiculed by his friends. Dev and Rishita come in defense of Shiva.

Gautam also starts selling the good stock of rice at a discounted rate.

Shiva helps Gautam load the sacks of rice into the truck. Seeing his little brothers working so hard to help him, Gautam feels proud.

In the meanwhile, Rishita is having a panic attack worrying about Dev and the Pandya family.