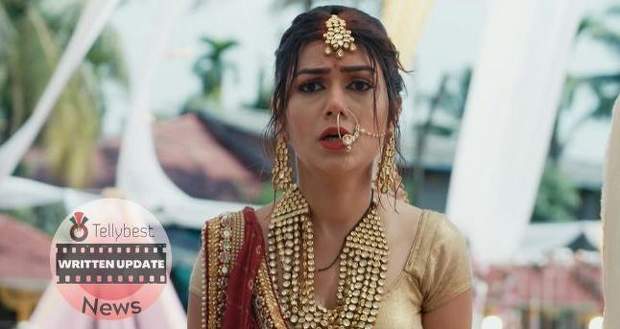 Today's Pandya Store 19th October 2022 episode starts with Dhara telling Swetha that she will not spare her and will expose her to everyone.

Swetha manages to stop her and lies to her that she did everything cause Deven had kidnapped Chiku.

Swetha forms a story and makes it look like Deven was blackmailing her for the money and the jewlery.

When Dhara still doesn't budge, Swetha starts her melodrama and tells Dhara that she and Chiku will have to beg on the road if she reveals the truth and gets kicked out of the house.

However, Dhara still doesn't budge and leaves the door while Krish is standing there with Chiku.

Dhara leaves without even acknowledging them which makes Krish confused and he stops Swetha asking what is happening.

On the other hand, the Pandya family hears Dev and Rishita making a commotion and demands they open the door.

Rishita finally reveals the truth to Suman and tells her that Swetha had gotten fake jewelry made.

However, Dhara comes there just then and lies for Swetha saying that she was the one who had gotten the fake jewelry made as she didn't want any more thefts in the house.

Dhara goes on to praise Rishita while walking towards her to hug her.

Later, Rishita confronts Dhara as to why she defended Swetha and Dhara reveals everything about Deven being Chiku's father and the story that Swetha told her.

Rishita accuses Dhara of melting at Chiku's mention in the story and tells her that she has started breaking the Pandya family.

Knowing that she is right, Rishita says that the jewelry will stay with her until they reach home and leaves.

Afterward, the bidai rituals are being done while Rishita thinks that the family is welcoming their suffering and not a daughter-in-law.

Further, Swetha's parents come to know that Gautam has paid half of the bill and feel impressed with them while talking about making changes in their will.

Meanwhile, the Pandya family is doing the Grahpravesh rituals when the Kalash falls on the outside making it inauspicious.

© Copyright tellybest.com, 2022, 2023. All Rights Reserved. Unauthorized use and/or duplication of any material from tellybest.com without written permission is strictly prohibited.
Cached Saved on: Monday 21st of November 2022 12:45:31 AMCached Disp on: Monday 5th of December 2022 12:20:56 AM