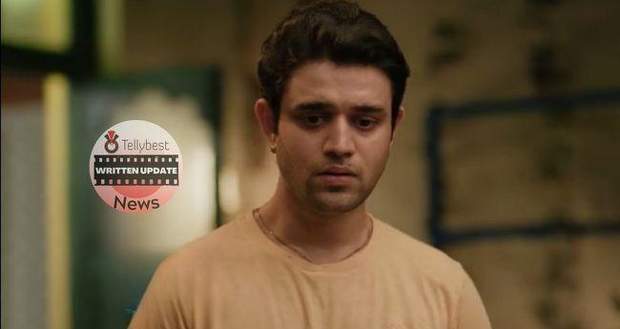 Today's Pandya Store 19th September 2022 episode starts with Swetha pacing on the balcony as she is stressed about returning home with Chiku the next day.

She accidentally hits her hand on a container and the object tumbles down making a noise that gets noticed by Krish.

Meanwhile, Dhara takes care of Chiku and gets emotional as she prepares herself for living without Chiku.

On the other hand, Swetha finds Gautam's secret stash of alcohol and starts drinking while Krish comes there and gets shocked.

Further, he takes the bottle of liquor from Swetha and throws it away while Swetha gets angry at him and later starts crying to Krish about her life.

Swetha cries to Krish that she didn't even want a baby and now she can't do anything because of the child while Dhara who wants a kid is childless.

At the same time, Rishita wonders about Swetha's tension when Chiku was found and thinks about 'Forum'.

She tells her doubts to Dev who misunderstands her and thinks that Rishita is happy that Chiku is leaving.

On the other side of the house, Shiva keeps thinking about Raavi's interactions with Arnav and feels jealous while she lays beside him and tries to get romantic.

However, she accidentally takes Arnav's name in the conversation which makes Shiva push her away from himself.

Rishita calls the police station and informs them that she got a hint about the kidnapper being someone named Forum.

Back at the balcony, Swetha tells Krish that she did many things to get rid of Chiku and is about to reveal her wrongdoings when Krish notices Dhara coming towards the balcony with Chiku in her hand.

Krish takes Swetha to the side and hides while keeping his hand on her mouth to prevent her from making any noise.

Swetha leaves from there while Krish sees Dhara planting a small plant and gets emotional as she says that she will nurture the small plant thinking as if it is her Chiku.

Further, she puts Chiku's hands on a mould of clay and gets his hand impressions to keep.

Krish consoles Dhara while she gives Chiku to him and runs to her room saying that she might not be able to give him back if she's with him for too long.

At the same time, Swetha thinks that she can not be caged any longer and decides to escape from the house.

Just as she throws the rope made by trying her clothes down the balcony, Krish comes to her room with Chiku in his hands.