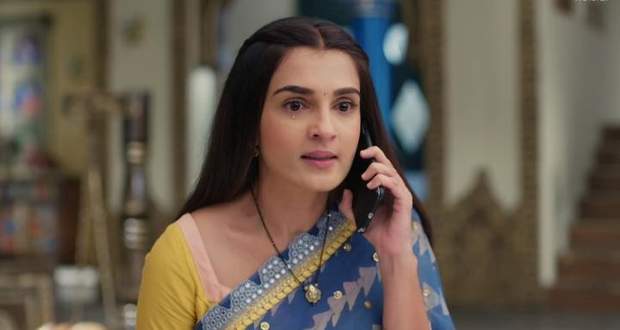 Today's Pandya Store 1st August 2022 episode starts with Suman and Rishita playing with the kid in the sleep while Dev brings the swing there.

Rishita and Dev talk about keeping the baby in their room at night while Dhara arrives there and states that the baby will stay with her.

However, Suman signals Dev and Rishita who keep saying that the baby will sleep with them, and leaves.

Suman argues with Dhara and tells her to go cook dinner for the family.

Later, during dinner, Dhara takes the baby from Rishita and tells her to eat while Suman asks Gautam about the mother's treatment.

However, Gautam doesn't give any answer as he doesn't want Dhara to know that the mother has run away and that he is planning to put the baby in an orphanage.

Further, Suman, Rishita, and Shiva find flaws in cooking and scold Dhara saying that she is too focused on the baby to cook edible food for them.

Gautam goes after her while Dev tells Shiva that they are doing it for Dhara's best too.

Suman feels happy that her sons are siding with her and not Dhara.

Later, Raavi is excitedly picking out an outfit for the shoot while Shiva comes there and taunts her for it.

However, feeling angry, Raavi tells him that she is deleting her account since she doesn't want to fight with him.

Feeling guilty, Shiva picks out a simple outfit for her and tells her to not change herself for others.

Further, they both share a romantic night as they look into the eyes of each other while Shiva carries her to the bed.

Meanwhile, Dhara picks up the phone call on Gautam's phone and learns about the baby's mother running away.

Gautam comes there just then and tells her to give him the baby reasoning that he didn't inform her because of the scene she made in the kitchen.

Just before Gautam can leave, Dhara stops him and pleads with him to let her take care of the baby instead of giving him to the orphanage.

Gautam tells her that he doesn't want to see her suffer when she gets obsessed with the baby and the baby returns.

However, Dhara convinces him to let her take care of the baby Chikoo until his mother returns.