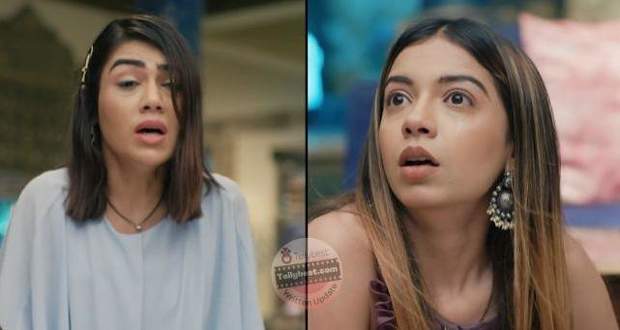 Today's Pandya Store 1st December 2022 episode starts with Swetha telling Gomby aka the police officer that Pandya’s family is trying to frame her.

Hearing this, Krish stands up very quickly to announce that Swetha has killed Dhara.

Swetha then screams that she has done nothing wrong with tears in her eyes but Rishita accuses her of calling Dhara home by any means to murder her.

On the other hand, Jhankana tells Harikishan that she also feels doubtful about Dhara’s intentions while Harikishan who is already against Dhara nods in agreement.

He then orders Jhankana to sign the papers quickly.

Back in Pandya’s house, disguised Gautam announces that they will do a postmortem of Dhara’s body before taking any action and when Rishita hears it, she whispers to Krish that Gomby is taking his role very seriously.

Krish worriedly informs Rishita that now Gomby will stretch this mess a lot and in return, Rishita also adds that instead of interrogating Swetha for the truth, Gomby is behaving like a real police officer.

Gautam then calls out for the constable much to everyone’s shock and when the real constable walks in, Swetha thinks Gautam is a real police officer since the constable is following his orders.

Krish questions Gautam about the constable, and Gautam happily replies that the constable is his friend now who is helping them out of humanity.

On the other hand, Jhankana gets stunned to see Swetha’s call this late and Swetha urges her to come to the Pandya house because everyone is blaming her for Dhara’s murder.

As soon as Jhankana cuts the call, Harikishan threatens her that if she does not take Swetha’s side, then he will break his relationship with her.

Elsewhere in the rail station, Suman mutters angrily that she thinks Gautam has sent them to pilgrimage in a bad heart that’s why they missed the train which has fallen out of track.

She further adds that they are lucky that they were sitting on the train and Shiva urges Suman to get into the auto.

Meanwhile, in Pandya’s house, Gautam and the costable start chasing Swetha around and during the chase, Swetha falls into the well.

Swetha feels guilty since the Pandya family is trying to save her even after what she has done to them when Krish saves her.

Afterward, Rishita is trying her best to wake the unconscious Swetha up; on the other hand, Gomby orders Dhara to wake up while muttering that she will win an oscar for acting like a dead body.

Outside the house, Suman and Shiva meet Jhankana and Harikishan who informs them about Swetha getting blamed for Dhara's murder but Suman denies it in loud voice.

Hearing the voice, Gomby informs Dhara that Suman is coming which makes Dhara wake up and she then narrates about how she saved herself from the thief's attack by putting the doll in front of her.