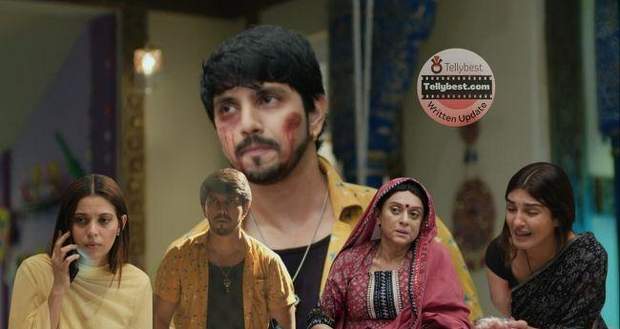 Today's Pandya Store 1st January 2023 episode starts with everyone putting their hand together while a soft smile appears on her face.

No TELECAST TODAY DUE TO THE AIRING OF 22ND ITA AWARDS

So far in the story of the serial,

The Pandya family has given Shweta twenty-five lakh rupees in exchange for Chiku after Shweta demands money from the family.

However, Shweta has very cunningly made the Pandya family sign the store papers which state the Pandya store belongs to her from now on.

Later, while the Pandya family is busy celebrating Chiku's arrival, Shweta crashes the party like a dark cloud and breaks the news.

Hearing this, everyone gets shocked and Rishita along with Raavi accuses the rest of the Pandya family of being stupid.

Afterward, in Pandya's home, Rishita questions Dhara about Chiku's adoption papers which makes Dhara pause as she does not have any answers.

However, entering the home, Shweta gives Dhara the adoption papers of Chiku and walks away.

Later while Rishita is busy taunting Dhara for choosing Chiku over everyone in the family, they hear Shweta's announcement.

Meanwhile, Dhara suggests spreading the rumor of Pandya's house being on sale but everyone refuses the idea.

After the news, the family drifts even more apart as Rishita and Dev have decided to go to Ahemdabad for jobs whereas Raavi goes to meet Arnav.

Raavi turns down the job after learning Arnav loves her and Shiva goes to fight a match to earn some money.

Later that night, Dhara begs everyone to give her one more chance when Shiva enters the home with several wounds.

When everyone refuses again, Dhara breaks down in tears and everyone agrees to give it a try.

© Copyright tellybest.com, 2022, 2023. All Rights Reserved. Unauthorized use and/or duplication of any material from tellybest.com without written permission is strictly prohibited.
Cached Saved on: Wednesday 25th of January 2023 08:58:58 PMCached Disp on: Wednesday 1st of February 2023 05:45:21 PM