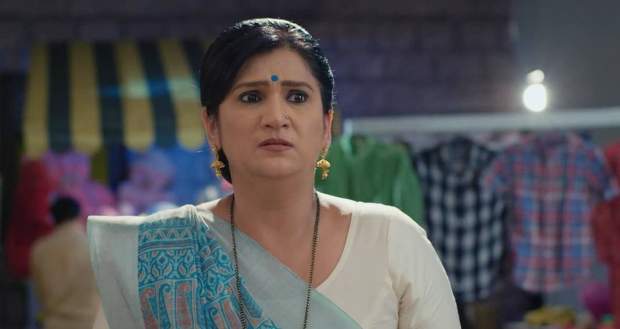 Today's Pandya Store 1st July 2022 episode starts with Prafulla running back to Pandya house and informing Suman that she saw Shiva in front of her house.

Dhara thinks of a plan of selling their house to repay the insurance money and bring back Shiva.

Further, Suman calls Dhara and Raavi and interrogates her if she saw Shiva according to Prafulla.

Raavi says 'yes' and starts with her drama by saying Shiva she saw was in austerity on the TV.

Prafulla acts like a lunatic and calls Shiva has arrived disguised as Raavi.

Dhara suggests they should help Prafulla and shift her to Kamla's house for the time being.

Suman gets emotional as Dhara says Prafulla is overthinking about Shiva and later Dhara thinks of talking to Suman about selling the house.

Kamla and her daughter-in-law try to taunt Raavi as they saw her giving a hug to a guy (Shiva).

Prafulla is shocked to hear Kamla's claims and thinks of finding the unknown guy.

Further, the neighbors try to taunt Suman and talk badly about Raavi's character.

Suman kicks the ladies out of the house and Dhara suggests selling the house as the neighbors are not treating them well.

Dhara says that Raavi misses Shiva in this house while Suman says they should go live in Prafulla's house.

Suman says that she will never sell this house even after her death.

Gombie says that Dhara's demand is baseless and Suman is right.

Dhara stays strong in her demand and says she will sell this house at any cost.

© Copyright tellybest.com, 2022, 2023. All Rights Reserved. Unauthorized use and/or duplication of any material from tellybest.com without written permission is strictly prohibited.
Cached Saved on: Wednesday 23rd of November 2022 04:01:46 PMCached Disp on: Thursday 8th of December 2022 02:31:31 AM