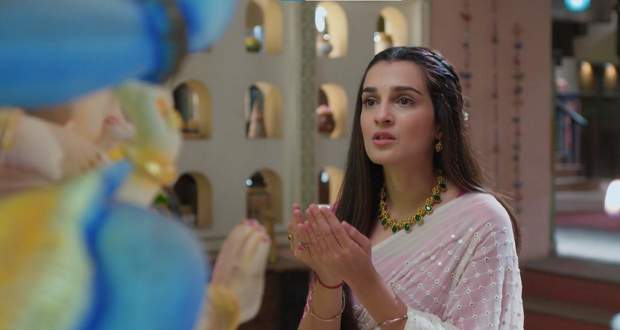 Today's Pandya Store 1st June 2022 episode starts with Kalyani questioning Kamini as to how Rishita got a hold of the necklace.

Kamini says that she doesn't know and informs her that she's going to check if the necklace is still in her cupboard.

Kalyani stalls Rishita and covers the necklace with the saree while Kamini checks the cupboard and gets shocked to find that it's not there.

Kamini worries saying that she has to do something before Dhara sees the necklace and exposes her.

Back in the garden, the pooja starts and the Pandya brothers also join their wives in putting the thread around the holy tree.

After the pooja ends, Krish suggests that they should do the Garba and everyone agrees.

As everyone is dancing, Kamini goes to Dhara and forces her to tie the threat to a specific place.

Dhara realizes that Kamini is planning something while Kamini goes to Rishita and intentionally makes her notice Dhara holding a thread ball.

However, Dhara doesn't do as told by Kamini and goes dancing with the family.

Kamini returns from the house and gets angry noticing the thread ball lying on the stand.

She makes Kalyani go inside so that she can proceed with her plan smoothly while Kalyani says that she will not forgive her if any harm comes to Rishita.

Later, Dev and Gautam overhear Kamini talking to some thieves on call to steal the necklace from Rishita.

Further, Dev and Gautam stop the thieves from entering the Seth house and confront them while Kamini requests one of her friends to save Rishita when she trips on the thread.

Afterward, Rishita walks to get water when she trips on the thread, however, instead of Kamini's friend, Dhara and Raavi save her from falling.

Dev and Janardan thank Dhara for saving Rishita while Kamini accuses her of trying to kill Rishita's baby.

© Copyright tellybest.com, 2020, 2021. All Rights Reserved. Unauthorized use and/or duplication of any material from tellybest.com without written permission is strictly prohibited.
Cached Saved on: Thursday 2nd of June 2022 02:34:26 AMCached Disp on: Saturday 25th of June 2022 07:59:45 PM