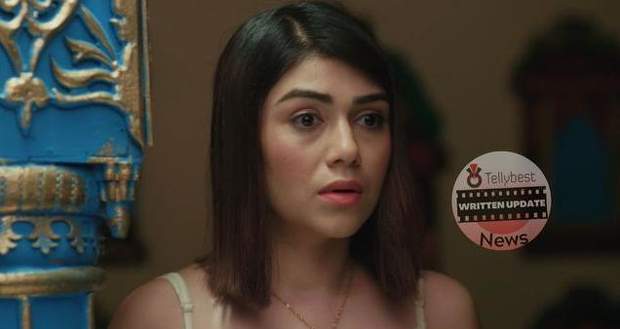 Today's Pandya Store 1st October 2022 episode starts with Swetha telling Deven to not ruin her life for the second time and giving him the baby saying that he is also responsible.

However, Deven laughs as he looks at Swetha panicking, and tells her that she is bold to assume that he will be helping her.

Deven further tells Swetha that he needs the money as soon as possible and will expose her if not possible.

However, once Swetha enters the Pandya house, Dhara starts questioning her while scolding her for going out late with Chiku.

Swetha angrily reminds Dhara that Chiku is her son.

Realizing her mistake, Swetha apologizes and leaves while Dhara thinks Swetha is lying.

The next morning, Suman gets a call from Swetha's mother telling them that they want to do Swetha's engagement also.

Suman agrees and tells her that they will arrange today's Navratri celebration along with the engagement.

Swetha overhears the conversation and gets annoyed when she gets a call from Deven.

Swetha goes to her room and attends the call as Deven threatens to come to her wedding and expose her if she doesn't give him the money soon.

After disconnecting the call, Swetha spies as Suman opens her cupboard and gives money to Dhara for buying the engagement rings.

However, the Panditji comes there just then and Dhara and Suman go there while forgetting to lock the door.

Swetha goes inside the room and is about to steal the money when Suman and Rishita come there and stop her.

They both start scolding Swetha while Swetha manages to save herself by playing the victim card and saying that she was picking up the fallen money on the ground and was just putting them back.

Later, Swetha is pacing in her room angrily saying that one problem ends and another one is created.

Krish comes there and asks her what problem she is facing which shocks her.

However, Swetha manages to lie that she was just talking about the transition from young women to married women.

On the other hand, Suman recalls closing the door and even turning the key which makes her wonder if Rishita's suspicions are correct.

© Copyright tellybest.com, 2022, 2023. All Rights Reserved. Unauthorized use and/or duplication of any material from tellybest.com without written permission is strictly prohibited.
Cached Saved on: Monday 21st of November 2022 06:52:06 AMCached Disp on: Monday 5th of December 2022 12:44:38 AM