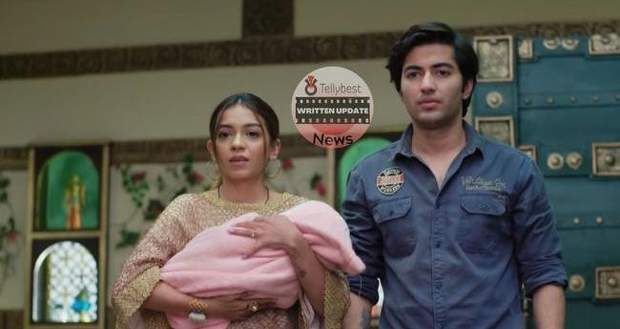 Today's Pandya Store 1st September 2022 episode starts with Shwetha acting as if she's fainting and shouting which gets the attention of the family members.

Krish rushes to take Chiku from her as Raavi and Dhara rush to help Swetha.

Raavi and Dhara take Swetha to the sofa and she lies that she was having a panic attack.

However, Krish scolds Swetha and tells Dhara to teach her how to take care of a baby before giving Chiku to her.

Swetha also acts and requests Suman to make her like Dhara so that she can take care of Chiku and Suman agrees.

Elsewhere, Rishita cries to Dev and tells him that she wants to book her favorite godown only and complains about Raavi getting everything she wants.

Dev's resolve breaks seeing her cry and tells her that he will talk to Suman about it.

Later, as Dev, Rishita, and Chutki return home, Suman confronts Rishita as to why she didn't leave the baby home.

Rishita taunts saying that everyone was busy taking care of Chiku so she left Chutki at Janardan's house.

Suman and Rishita talk against each other as the family looks on.

Realizing the real reason, Suman confronts Rishita getting jealous of Raavi for bringing in more money for the family.

Rishita gets emotional and starts making up excuses that she also went out to take a look at Raavi's car as she does not know cars.

Suman argues that the car will be of Raavi's interest and Raavi also starts talking about the car out of excitement.

However, Rishita takes it as an insult and starts crying while Suman tells her that she will be the one paying for the down payments of her godown and Raavi's car.

The next day, the family gets ready to go to the godown and then brings the car and Rishita refuses to let Chutki wear the clothes that Dhara bought saying that they are middle class.

Dhara gets upset and Swetha praises Dhara while putting the clothes that Dhara bought on Chiku to impress her.

Rishita confronts her asking why she doesn't seem interested in getting to know Chiku and Swetha turns the conversation to how Rishita is taking Dhara for granted.

Swetha tells them how she trusted the wrong guy and is in this situation now while Dhara comes there with the scissors for Rishita's ribbon-cutting ceremony and Kalash for Raavi's car.

However, Rishita says that she also wants to do the Kalash pooja at her godown and Raavi gives her the Kalash saying thag she'll take one from the temple.

Swetha sees everything and concludes that she will manipulate Rishita so that she can get away from the Pandyas and Chiku.

© Copyright tellybest.com, 2020, 2021. All Rights Reserved. Unauthorized use and/or duplication of any material from tellybest.com without written permission is strictly prohibited.
Cached Saved on: Saturday 1st of October 2022 11:22:23 PMCached Disp on: Monday 3rd of October 2022 09:16:24 PM