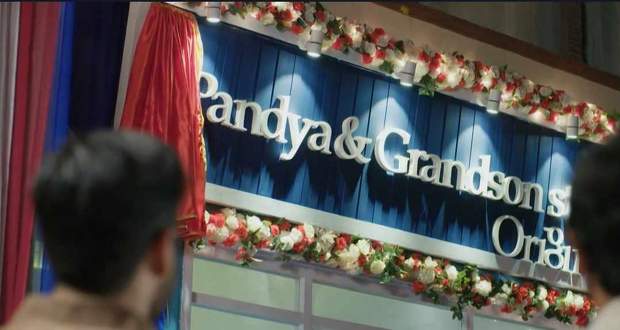 He informs all that Dhara had locked him in the godown, which Rishita assumes to be a plan to hurt her.

Janardhan asks them to forget all the mishappenings and cut the cake, he also adds that he has a surprise for them.

Hardik informs Gautham that Dhara is with him, and Dhara speaks to Gautham, she says that she was fine.

She tells Gautham that Janardhan has planned something for the party and asks him to take care of it.

She also tells them that Dev is locked in the godown, and later all leave the house.

At the party, Janardhan and Rishita force Dev to cut the cake without the Pandya family, while all of them enter with Gautham.

On seeing them, Dev starts questioning Gautham for Dhara locking him and spoiling the party.

Gautham tells him that Dhara is not well and informs him about the fire.

Rishita states that Dhara had planned the fire herself in order to spoil her party.

She says that despite Dhara’s plans her party will go well.

Right before the cake cutting ceremony, Shiva and Raavi take the blessings of Gautham and Suman and say that it was their wedding day as well.

Dev and Rishita cut the cake happily, amidst all wishes and claps.

However, Suman signs no when Dev gives her the cake, while Shiva has the cake by himself reluctantly.

Later, Janardhan reveals his surprise for Dev and Rishita.

The Pandya family gets tensed as Janardhan and Kamini hand the gift box to them and they join hands assuring that they stay together no matter anything happens.

Janardhan shows Dev and Rishita a store and asks them to lift the curtain to find out the surprise.

Janardhan presents them with a new store named "Pandya and Grandsons Store Original".

Suman and Gautham are confused, while Shiva gets furious.

Dev tries to question Janardhan, but he asks him to open the store, and Rishita hugs Janardhan and thanks him.

Janardhan says he had gifted the new Pandya store as per the wishes of Darshan and declares that two Pandya stores would run together.