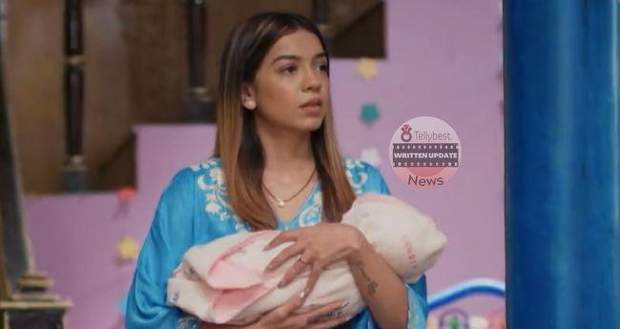 Suman tries to comfort him saying that the whole family is with him in raising Chutki.

However, Dev reveals that he is upset because of Dhara and says that he feels guilty as Dhara didn't have any kids of her own to raise the Pandya brothers.

Dev says that he doesn't even have the right to give Chutki to Dhara against Rishita's wishes.

Suman tells Dev that she understands his pain but she knows how Rishita is feeling too and explains to him the reason behind Rishita's hesitancy to give Chutki to Dhara.

The next morning, Rajjo enters the Pandya house but gets stopped by Suman with her stick.

Suman asks her the reason for coming to Pandya's house.

Rajjo reveals that Raavi has called her here after seeing some videos of her.

Just then, Raavi comes there and greets Rajjo excitedly.

Rajjo further invites the whole family to the fair in her village and tells Raavi that she can take her video there.

After some time, Rishita shouts for Raavi but doesn't get a response which leads to her going to the main hall.

Just then, Raavi's parents and Kamini come there and greet her and the Pandyas.

Raavi gets happy to see her parents while Kamini stands in front of Suman and taunts her saying that they are forgetting the heir of the family and mourning the loss of a baby that wasn't even their own.

Kamini and Janardan further mock the Pandya family and scold them for not informing them about the arrival of the Chutki.

The rest of the Pandya family also come there and Kamini gives a gold chain with a diamond pendant on it to Kalyani and tells her to put it around Chutki's neck before holding her for the first time.

Kamini further smiles and asks what did Suman give Chutki as an honoring which Dev doesn't like.

Suman thinks that she forgot about Chukti in the chaos of Dhara losing the baby.

Dev states his displeasure with Rishita's family's showing off but gets silenced by Rishita as she states that the Pandya family forgot about honoring her child.

Later, Suman tells everyone that they are doing the Naamkaran function on Janmashtami and says that she will give the gift to Chukti then only.

Just then, Dhara gets a call from Shweta's mother who asks her about medicines revealing that Cheeku has a fever.

Dhara gets frantic and tells Shweta's mother to come to Pandya's house.