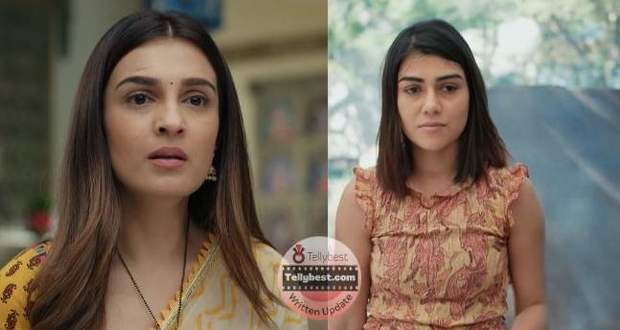 Today's Pandya Store 20th December 2022 episode starts with one by one all the Pandya family walking away leaving Dhara and Gautam.

After everyone walks away, Dhara questions Gautam if her family will break into pieces and Gautam hugs her tightly.

While Dhara and Gautam both hug each other, Dhara gets scared thinking about earlier miscarriages and asks Gautam if this dream of having Chiku will not break this time.

Gautam however orders Dhara not to get scared as this dream is a reality now while Dhara looks scared.

Meanwhile, in a toy shop, Rishita screams at Dev for playing with the toy like a little kid whereas Shiva yells at Krish for wanting to buy a helicopter.

Shiva even purchases a toy gun for Chiku and when Krish questions him if he wants Chiku to become a goon, Shiva happily announces Chiku will be a police officer after growing up.

In the meantime, Raavi shows everyone a black dress for Chiku but Rishita orders her to put it away.

Raavi then buys another pink dress for Chutki but Rishita again orders her to put it away as Chutki has many pink dresses already making Raavi upset.

Noticing Raavi’s sad face, Shiva questions her if she is okay.

On the other hand, in Pandya’s house, Dhara finds Suman praying in front of the god and thanks her for bringing happiness back into her life.

When Dhara kneels in front of Suman, Suman tells her that the money is not a big deal as it was meant to be used for an emergency.

Suman further announces happiness can never be brought with money but in a way, they have brought Shweta to run away.

Suman even expresses she is scared something can go wrong and Dhara also tells her that she is frightened too.

Elsewhere in the toy store, Raavi tells Shiva that she thinks something can wrong today but Shiva orders her not to think too much.

Rishita along with Dev and Krish arrive there and orders Krish to keep his mouth shut and Shiva mutters he will hang Krish if he spoils the fun.

Meanwhile, in the registry office, Swetha gets happy to read the Pandya store document and offers hundred rupees to the lawyer.

The neighbor aunty then arrives there with onion and Shweta orders Chiku to stay with his Yashoda Maa, Dhara until he turns eighteen.

Shweta further promises to come back for Chiku when he will the owner of the property and all Chiku need to do is choose her instead of Dhara.

Later in Pandya’s house, Suman notices Rishita and Raavi are not standing in the hall while others are present.

Suman then goes to search for these two Devi and finds Rishita and Raavi in Dhara’s room.

When Suman questions Raavi if this money will cause trouble in the family, Raavi firmly announces not the money but that sometimes small mistakes cause the family to a rift.

Rishita however denies it as she knows her family is much stronger than this.

Later, Suman orders Dhara to come with them to the registry office when she announces she will stay at home with Rishita and Raavi.

Suman even teases Dhara by saying that Dhara is over the moon with happiness but is not showing it on her face.

Afterward, in the registry office, Shweta gets upset when she realizes Dev is reading all the documents very carefully as it can spoil her plan.

Meanwhile, in Pandya's house, Rishita and Raavi discuss that it is a little odd that Shweta is ready to walk away from their life this easily.

© Copyright tellybest.com, 2022, 2023. All Rights Reserved. Unauthorized use and/or duplication of any material from tellybest.com without written permission is strictly prohibited.
Cached Saved on: Wednesday 25th of January 2023 05:51:52 PMCached Disp on: Wednesday 1st of February 2023 06:53:31 PM