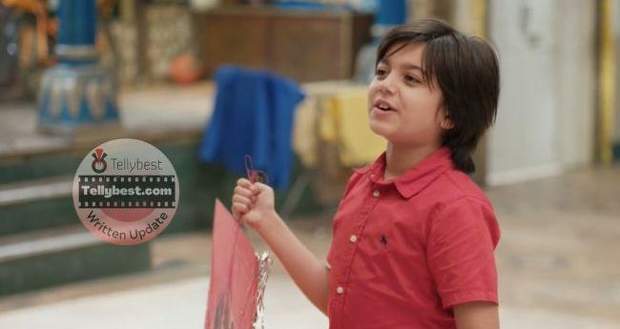 However, his kite gets cut by somebody else and he screams that his brothers flew away.

He shouts at Dhara on the terrace that it all happened because of her.

Since the kite had Dev and Shiva's cutout on it, Gomby collapses in pain and gets reminded of the deep pain he has been enduring for seven years.

Dhara looks at Chiku who doesn't waste any moment to bring those kites back.

Meanwhile, Dev and Rishita are talking about how they got fired from their job when their househelp, Savita, complains to them about Shesh cutting her hair.

Shesh finds refuge under Dev's arm as Rishita glares at him while Savita volunteers not to work in their house.

Shesh complains that Rishita neither lets him play with friends nor fly kites.

He says Mumma is bad while Rishita gets angry at Dev for spoiling him a little too much.

At Pandya House, Chiku brings back the kites after meandering through the streets of Somnath and Gomby stumbles downstairs as well.

On the other hand, Krish is seen calling an older couple "Mother & Father" who ask him to celebrate Mankarsankranti by flying kites.

However, Krish who now wears a pair of fashionable spectacles as well says he doesn't want to be bound by the strings he left long back and goes to drink champagne at the luxurious, Lohri party, his newfound parents have organized.

Rupy, who is his mother-in-law of Krish feels bad that they have ruined his mood since they have found a wonderful son in terms of a son-in-law.

Meanwhile, Dhara hears Suman shouting from her room and she finds her lying on the ground, unconscious.

Dhara screams for Gomby to come in and help her but he is too drunk.

Raavi and Shiva are seen then, talking to each other.

Raavi asks him to eat as she hand-feeds him.

Shiva tells Raavi that he will only eat if she promises not to say that they are alone and everyone else has abandoned them.

Later, their son, Mitthu walks in and tells Raavi that he got beaten up.

Raavi grumbles that the father and son are the same when suddenly, their landlord walks in.

At Pandya Nivas, both Dhara and Chiku try to wake Gomby up but he doesn't which leads to Dhara calling the ambulance for Suman.

Back in Raavi's house, she begs at the feet of the landlord to give her one more month to pay the rent of five months.

After the landlord leaves, Raavi looks back at Shiva who is sleeping on the cot, and goes to the Puja room.

She rebukes God's picture kept in front of her, saying she is all alone.

At the hospital, the doctor informs Dhara that Suman has suffered a heart attack while Chiku goes back to bring Gomby somehow.

Chiku does a lot of tactics and drags Gomby to the hospital and tells Dhara that she can tell him to lift 25 kg of weight but not Gomby.

Gomby is still not able to open his eyes due to a drunken stupor while Dhara screams at him to remember his responsibility towards her.

Dhara gets hurt and she says she is all alone when she needs a shoulder.

Seeing this, Chiku calls Rishita and Dev, announcing that Dadi (Suman) has suffered a heart attack.

Rishita takes the phone from Dev's hand and asks Chiku not to call them while Dev gets quiet and sits on the bed, all brooding.

Rishita tells Chiku to tell Dhara not to use him or Suman, making Chiku feel confused.

© Copyright tellybest.com, 2022, 2023. All Rights Reserved. Unauthorized use and/or duplication of any material from tellybest.com without written permission is strictly prohibited.
Cached Saved on: Wednesday 25th of January 2023 10:42:25 AMCached Disp on: Wednesday 1st of February 2023 09:41:20 PM