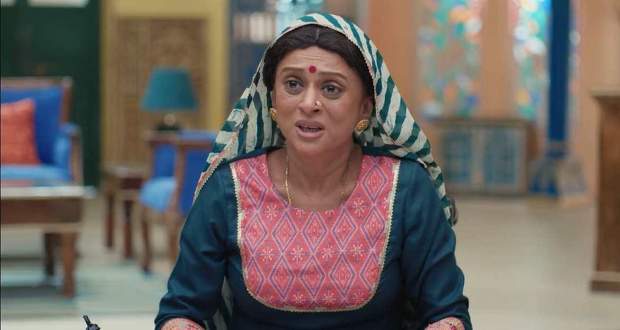 However, Suman says her Krish can never steal from her, including Dhara who thinks the same.

Suman scolds Dev and Gomby for clinging too much to their wife’s pallu.

Shiva funnily says that it is time for both Dev and Gomby for holding their mother’s pallu but Suman interrupts her and says Shiva is on his way too, becoming Raavi’s puppet.

However, Suman decides she will check everyone’s room to catch the culprit who stole the money.

Meanwhile, Kirti requests Janardhan to let her go and marry Krish but Janardhan is scared of society taunting him if Kirti elopes with Krish, just like Rishita did with Dev.

Kirti says she tried asking Krish to settle with her at her house but he loves his family too much.

Kamini then asks Kirti if she loves her family the same way Krish does.

However, Kirti says she just wants to marry Krish and settle down with the money he earns through online trading.

Meanwhile, Suman discovers that Raavi hides chocolates and Kurkure to eat in the night in her room along with Shiva.

Suman then gets carried by Gomby to his room but Rishita knows it is Krish who has stolen the money.

On the other hand, Krish keeps calling Kirti but she hesitates to pick up his call in front of Janardhan and Kamini.

Janardhan calls Kirti stupid for believing the necklace gifted by Krish to her to be made out of diamonds.

Kamini then asks Kirti if she is truly ready to adjust in her life like Rishita is made to do in Pandya House.

Kamini slowly manipulates Kirti’s mind and says she will have to cook her own food, listen to Suman’s taunts all day and be unable to shop recklessly due to the shortage of money in the Pandya Household.

At Pandya House, Raavi sees Kirti’s new post on social media that has a caption about eloping.

Raavi then informs Suman, Dhara, and Rishita about Krish and Kirti’s plan to elope and get married.

© Copyright tellybest.com, 2022, 2023. All Rights Reserved. Unauthorized use and/or duplication of any material from tellybest.com without written permission is strictly prohibited.
Cached Saved on: Monday 21st of November 2022 06:59:05 AMCached Disp on: Thursday 1st of December 2022 11:16:30 PM