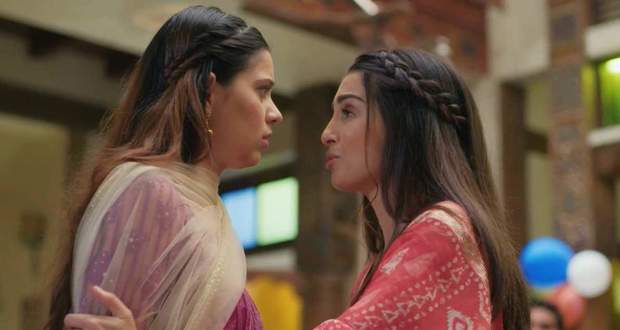 Today's Pandya Store 20th June 2022 episode starts with Raavi refusing to take the check and wishes to get her Pandya Store instead.

Suman agrees to Raavi's request and asks Gombie to take the money as Shiva would do the same for the sake of Pandya Store.

Gombie says that he is fully capable to find another way instead of taking the money received after Shiva's death which makes the family emotional.

Further, Gombie receives a call from a guy who wants to tell him the truth about Shiva but the call disconnects due to network issues.

On the other hand, Prafulla arrives and talks to Raavi about how the Pandyas are using her to make her work relentlessly and offers her to stay at Prafulla's house instead.

Raavi refuses to leave the Pandya house and Prafulla leaves the house.

Meanwhile, Shiva calls out Raavi's name and murmurs the name of his family.

The man who is giving shelter to Shiva discusses talking to his family the next morning.

Further, Dhara and Gombie discuss not taking money from Raavi as money will make her confident and secure about her future.

On the other hand, the doctor arrives and informs the caretaker that Shiva's condition is not stable.

Meanwhile, the caretaker's wife suggests he not call Shiva's family as he looks like a perfect match for their daughter.

Shiva overhears their conversation and is shocked to find out about their intentions of marrying him off even though he has a family in Somnath.

Further, Raavi is nowhere to be found which makes the Pandyas worry about her.

Gombie receives a message of 10 lakh rupees being transferred to his account and Gombie feels guilty.