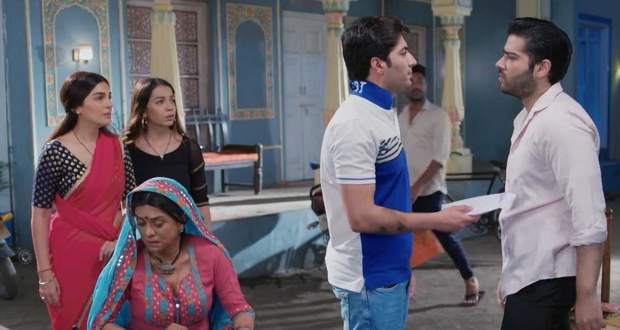 Today's Pandya Store 20th May 2022 episode starts with Dhara and Raavi keeping the sellable goods on a stand and trying to sell them as Gautam and Dev shout to attract customers.

A customer advises Dhara and Raavi to find out who committed the arson and feel pity for them.

Most of the customers see the products and leave without getting anything.

Two ladies come there and try to bargain with Raavi.

However, Raavi tries to reason while one lady tells Dhara that Raavi has become a curse to the family.

Meanwhile, at the doctor's appointment, the doctor asks Rishita why she is worried when she says that she is having family problems.

The doctor says that she wants to speak to Dev alone and further tells him that Rishita might go into a depression soon if her anxiety keeps rising which is not good for her and the baby.

Dev asks him what he can do and she suggests taking Rishita away from stress.

Back at the Pandya store, the family counts all the money they have and realizes that it is not enough for the repair of the shop.

Gautam says that they have no other choice but to mortgage the house while Suman recalls how Gautam got the papers back from Janardan in the past.

Elsewhere, Dev and Rishita are packing bags while she tries to reason that they can't leave the family alone in a time of need.

Dev tells her to remember what they have to say and she agrees while repeating that they are leaving to see a friend of Dev who's sick.

However, Kamini overhears their conversation and thinks to take Prafulla's help to stop them.

Elsewhere, Gautam goes to the bank and applies for a home loan while Janardan is also at the same bank.

Janardan goes to the bank manager and manipulates him against Gautam.

Meanwhile, Prafulla comes to the Pandya house and informs Suman that Dev and Rishita are leaving for Ahmedabad to open their second shop.

Suman gets worried and thinks that she cannot let that happen.