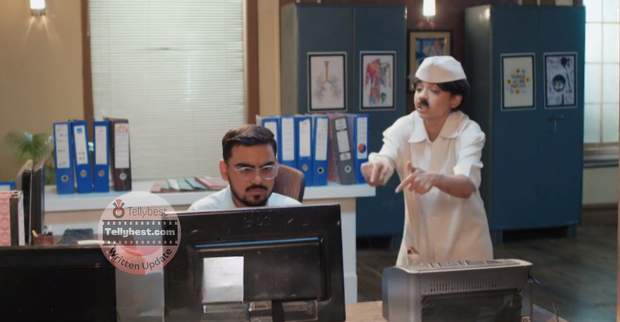 Today's Pandya Store 20th November 2022 episode starts with Gautam questioning Raavi and Dhara about where they will go in a loud voice so Suman can hear him.

Dhara then replies that she will live with her brother and will take Raavi along with her.

Hearing this, Gautam announces that it’s ok to stay in her maternal home for some time but it’s not ok to stay there for a long time.

Meanwhile, Raavi also yells that she earns so she can afford to rent to which Suman taunts that Raavi is showing off.

Gautam then tells Dhara that even if nobody trusts her and Raavi, he will always stay by their side.

Irritated Suman orders Gautam to leave as well if he wants and Krish comments that he supports Gautam in his decision.

In the meantime, feeling shaken by Shiva’s cold attitude toward Raavi, Dhara rushes to the house to scold Shiva for misbehaving with Raavi.

Disappointed Dhara yells that she feels ashamed for thinking that she has groomed Shiva to which Shiva growls that he cannot believe he gave Dhara the mother position in his life.

Finding Shiva misbehaving with Dhara, Krish orders him to move and Shiva starts fighting with Krish for it.

Afterward, Dhara informs Shiva that he will regret his decision when he will learn the truth but neither Raavi nor she will forgive him.

With angry tears in his eyes, Shiva announces that his feeling for Raavi is gone now while Raavi just listens.

Meanwhile, Swetha gets agitated after reading the text about Rishita being in the hospital and walks away from there.

Later, while Dhara is walking away from the Pandya house, Suman averts her eyes away in pain whereas Shiva stares at Raavi with betrayal in his eyes.

Once outside, Dhara gets a call from Rishita who urges Dhara to stay in the Pandya house till she comes back with proof.

At first Dhara orders Rishita to come back but when Rishita mentions that no one is not able to recognize the signature in the report, Dhara informs her that one junior doctor and one senior doctor checked Raavi.

She further tells Rishita that the junior doctor informed them about Raavi being pregnant but the senior doctor did Raavi’s fibroid removal surgery.

Seeing this, Rishita notices a ward boy walking away with a wheelchair and starts acting like a mad person for the CCTV footage.

On one hand, Rishita decides to do something drastic; on the other hand, Swetha suggests the junior doctor take some time off.

Later, Rishita disguises herself as a ward boy and gets shocked to see Swetha in the footage as well.

On the other hand, Dhara and Raavi get into the auto to walk away from Pandya’s house.

© Copyright tellybest.com, 2022, 2023. All Rights Reserved. Unauthorized use and/or duplication of any material from tellybest.com without written permission is strictly prohibited.
Cached Saved on: Monday 21st of November 2022 12:47:01 AMCached Disp on: Thursday 1st of December 2022 11:54:29 AM