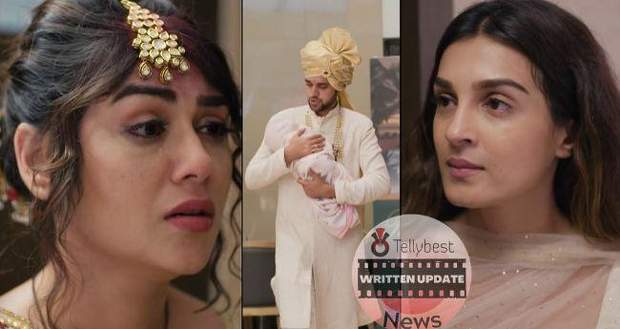 Looking at the Kalash, Suman questions Shweta if she has not learned the meaning of kicking inside and calls it “bad luck” while Rishita starts laughing hard.

Suman urges Rishita to stop and Rishita announces that god is trying to give them the sign but the Pandya family is oblivious.

Ignoring Rishita’s comment, Dhara orders Shweta to dip her feet in aalta and enter the home.

After Shweta and Krish enter, Suman tells the guests that today there is no food arrangement in their home so they can return to their houses.

Suman then informs Shweta that she cannot sleep with Krish till her “muh dikahyi”.

Rishita tries to talk Suman out of this plan but Suman happily informs Rishita that she is giving her another chance to befriend Shweta and become “BFFs”.

Suman further offers Shweta her jewelry and orders Rishita to give it to her.

Rishita reluctantly walks towards Shweta to give the jewelry but when Shweta spreads her hand to take it, Rishita starts tugging the jewelry bag.

She even lies to everyone that she and Shweta are already friends and Shweta has specifically told her that she is very careless about money and jewelry so Suman should keep it.

Shweta who was thinking of running away with the jewelry looks at Suman sternly but Suman quickly takes the bags.

Before leaving, Suman looks at Dhara one last time and smiles mysteriously.

Meanwhile, Rishita embraces Shweta in a hug and sarcastically remarks that she will not let Shweta stay in the Pandya house for long.

Shweta also replies that Rishita was not able to stop the marriage and since she is Suman’s favorite, Rishita can do nothing.

Afterward, Raavi offers Shweta to sleep with her as Rishita has to take care of Chutki during the night while Shiva looks at her with sad eyes.

Later, in the room, Dhara notices Gautam lying on the bed and happily tells him that since every child is married their responsibility is finished.

Gautam then questions Dhara about why she lied and what is the role of Shweta in this.

Dhara tries to change the topic but Gautam informs her that he knows all the jewelers so he can know about the fake jewelry so Dhara should spill the truth.

Later, Gautam and Shiva tires to teach Krish about marriage and Dev tells them sheepishly that Rishita has kicked him out of the room.

Afterward, they start playing the music and they get lost in their memories of their loved ones.

Meanwhile, Shweta informs her friend Forum that she will soon come to Dubai.

© Copyright tellybest.com, 2022, 2023. All Rights Reserved. Unauthorized use and/or duplication of any material from tellybest.com without written permission is strictly prohibited.
Cached Saved on: Monday 21st of November 2022 04:48:02 PMCached Disp on: Tuesday 29th of November 2022 10:31:47 AM