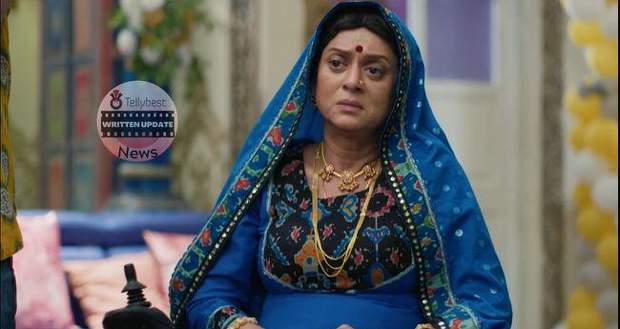 Today's Pandya Store 20th September 2022 episode starts with Swetha seeing Krish and getting worried as she wonders if he saw the rope or not.

Meanwhile, Krish thinks that he cannot give Chiku to Swetha in this condition and leaves there after taking Chiku's blanket.

Swetha thinks that she cannot escape as she will fall in the eyes of the Pandya family.

The next morning, Raavi tells Dhara that she has to go meet Arnav once Swetha and Chiku leave while Rishita says that she also has to go to the police station.

Meanwhile, Dhara sees Chiku crying and leaves from there and comes back with all of Chiku's things saying that Swetha didn't pack them.

Further, Dhara scolds Swetha for not holding Chiku properly while Rishita tells Dhara to not worry about them anymore.

On the other hand, Gautam is looking for his wallet when his eyes stumble on the handprint of Chiku and gets worried about Dhara.

Back in the hall, Suman is about to call Swetha's parents when they hear the sound of drums and other orchestral sounds coming toward their house.

Dhara runs to the kitchen and locks herself in there thinking that she can not see Chiku leave.

Swetha begs Suman to let her stay for another day but Rishita interrupts them saying that Swetha will have all the time in the world to take care of Chiku there.

Just then, Swetha's parents come there and start putting garlands around the family member's necks and congratulate them.

Suman asks them that it is not necessary since they are going to take away Swetha today only.

Swetha's mother asks Suman why they are sending Swetha back when they have sent a marriage proposal.

Dhara also gets out of the kitchen and gets shocked to hear everything while Krish comes forward and reveals that he is the one who had sent the proposal.

Suman and Rishita start scolding Krish saying that he is not responsible enough or mature enough to take care of both Swetha and Chiku.

Swetha also gets angry at Krish and holds him by the collar telling him that she does not need any sympathy from him.

However, Krish says that his emotions are not that sympathy but love for Swetha.

Swetha gets angry and tells her parents to leave from there and goes towards the door.

Swetha's mother tells her to calm down and praises Suman's parenting.

Krish speaks up and says that Dhara has raised him more than Suman which makes Dhara realize that Krish might be doing this for her.

Krish takes Chiku from Swetha and gives him to Dhara while Swetha and her family leave.

Dhara asks Krish if he's doing it for her which shocks the family.